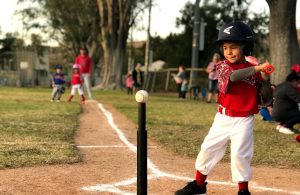 Crammed into the massive Mitchell Center auditorium, I craned my neck and scanned the crowd. Twenty-two hundred in the University of South Alabama Spring Commencement. After a lengthy search, I finally spotted him, a tiny dot in the swarm. My Sam. We arrived early to secure a parking space, and I opened my devotional. Psalm 46, “God is for us a refuge and strength, a helper close at hand, in time of distress.” As the university orchestra practiced Pomp and Circumstance No. 1 in the massive sports arena, I reflected on another time long ago when I sat in a sports venue with a devotional and thanking the Lord for his love.

Sam, who was born with cerebral palsy, begged me to play T-Ball, and I almost refused, afraid of exposing him to ridicule and rejection. However, my apprehension disappeared when we met Head Coach Judy and Assistant Coach Roy. Their authoritative but supportive encouragement made a positive impression on me and Sam. Cautiously, I asked the coaches how they decided who played on which T-Ball team. My concern was that all of the less-able players would be on a separate team. “Oh no, we don’t do that,” stated Coach Roy he shook his head back and forth puffing on a Marlboro. “Each T-Ball team has their share of assets and liabilities. The T-Ball league has a mixed bag; tiny kids, tall kids, fat kids, skinny kids, and some are physically challenged. They are only divided by age. So Sam will be with other seven-year-olds, mostly first and second graders. Both girls and boys play on the same team.” Coach Judy added, “Our league has a steadfast rule: Everyone plays. We have no exclusions. Sam, I’ll bet you have a great throwing arm!” He nodded in agreement, clutching his granddaddy’s fielders mitt. She grabbed a shirt inscribed, Red Sox 7, and handed it to him. Sam grinned, clutched the shirt, and declared, “That’s Mickey Mantle’s number!”

Sam’s best friend, Joey, was also on the Red Sox team. He was obese, and Sam had cerebral palsy on the right side of his body. Legos and Hot Wheels were their passions. With eyes as mere slits and around twenty pounds overweight, Joey puffed and strained with each breath. Joey’s uniform resembled a second skin as if he were poured into it. Joey’s teammates complained because he drank all the juice pouches, leaving them thirsty. While on the bench, Joey munched on Moon Pies, Cheese Doritos, and Krystal burgers. As a right fielder, Joey spent most of his time throwing clumps of grass in the air. However, he was a power hitter. Joey always scored at least a base hit and usually made it to third. Sam, with coke-bottle spectacles, scissor gait, floppy neck, wobbly right arm, and Mylar leg brace, was not a skilled hitter. However, his strong left arm proved him to be an excellent center fielder.

The ten weeks quickly passed and surprisingly, the Red Sox were now tied for the T-Ball Championship. A flip of the quarter decided it: The Dodgers bat first and the Red Sox get last ups. The ten-week T-ball season began when the days were still cool. The steamy, dusty, scorching hot summer was almost over at Ft. Knox Army Post. Due to the unrelenting Ohio Valley heat, these first and second-graders practiced and played their five-inning games in the mornings. But this was no morning game! The championship game was worthy of afternoon play to maximize attendance. Crammed like sardines onto the only set of bleachers, I looked up and realized this must be a record turnout. Not only were Dodger and Red Sox parents in attendance, but the other league teams as well. Ensconced on the gridded aluminum bleachers of Patton Field, I felt thankful for the low sun behind me that sweltering afternoon. I settled in, reading my devotional book intermittently.

Toward the end of the game, I got distracted and tired. Then, I heard the sound of swarming bees. Wiping away sweat from my forehead, I looked around but didn’t see any bees. The buzzing quickly changed to a humming, murmuring, verbal chant moving through the crowd. I realized it wasn’t bees, it was conversation and laughter. I wondered what caused the commotion. Then, I heard, “Oh goodie, it’s the crippled kid! We won. We won!” chuckled the Dodger mom in front of me. She and her bleacher buddy gleefully exchanged a high-five. I grasped that they were speaking of Sam. Like a trapped lioness, I focused on the scoreboard: Last inning, two outs, and the score is tied! Next to home plate, my Sam warmed up.

Groggy and wet from the intense heat, I scanned the field. Oh my gosh! Bases loaded! During the entire season, Sam never had a base hit, striking out every time. The crowd decided the game was over. Red Sox parents grumbled and started packing things up. The laughing and celebration escalated as Sam approached home plate. Dodger fans and Dodgers on the field began celebrating. Their third base player drew pictures in the dirt. Centerfield inspected dandelions. The Dodger right fielder danced a jig. The Red Sox were about to lose, thanks to the crippled kid.

As I watched the celebration in horror, I observed Coach Judy on the field. “We only need a single, Sam. Just a single, hon. I know you can do it,” she cooed. Sam was oblivious to the growing pandemonium. I realized Sam needed a miracle.

I had just read Jeremiah 33:3 five minutes earlier. “Call unto me, and I will answer thee, and show thee great and mighty things, which though knowest not.” I clasped my sweaty palms, closed my eyes, and prayed. “Lord, I’m taking you up on this. Please answer my urgent need.” While praying, I was suddenly jarred from my trance by a thunderous WHACK! The ball exploded off the T-Ball stand and soared like a rocket past the dancing Dodger in right field. Stunned, the Red Sox fans ran over to the chain-link fence and screamed, faces ablaze, “GO SAM, GO!!” Sam stood there for one instant, then ran like a jackrabbit. It was a homer! Neck bobbing, arms flailing, and cast clanking, Sam ran all the way to home base and into the waving arms of Coach Judy and Coach Roy. The Red Sox won the T-Ball Championship by four points.

That steamy summer day at Ft. Knox, two miracles occurred on Patton Field. As we drove home, Sam exclaimed, “Mom, did you hear all those people cheering for me when I got up to bat? Now I know how Mickey Mantle felt!” I smiled and thanked the Lord for a “great and mighty thing.”