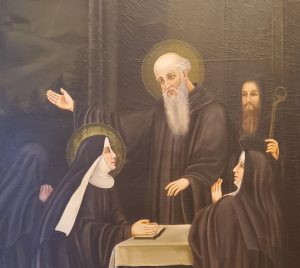 As Benedictines around the world celebrate the Solemnity of St. Scholastica on February 10, I took up once again the well-loved and compelling story of the twins, Saints Benedict and Scholastica, from chapter 33 of the Life and Miracles of St. Benedict written by Pope Gregory the Great. The story highlights the last of the yearly visitations between the two saints. On this particular occasion the two saints overextended their usual time for prayer and spiritual sharing, enjoyed a meal together, and before they knew it, night overtook them. Scholastica entreats her brother, “I beg you, do not leave me tonight! Let us speak till morning of the joys of the heavenly life.” One can almost feel the ardent longing in Scholastica’s heart. Since we learn in chapter 34 that she will soon die and her soul ascend to heaven, does she have a strong premonition that this visit could be their last? Could her prayer for rain be prompted by her desire for a longer last goodbye?

Those who are familiar with the story know that St. Benedict, a man revered for his holiness and right conduct, takes the moral high road and tells his sister it was impossible, “I must not remain outside of the monastery.” In essence he is saying, “I would be breaking all my own rules if I stay, and just think of what a bad example it would set for the monks.” The man bent on listening to the Lord with the “ear of his heart,” misses the love beckoning him to stay in the present moment. Is St. Gregory trying to teach us that even the greatest of saints can miss the call of love?

In his commentary on this story in The Life of Benedict by Gregory the Great, Father Terrence Kardong comments, “It should not go unremarked that this is a very funny story! What could be more hilarious than the comeuppance of a domineering brother in the face of a sister who was wiser in the ways of the heart? The very spectacle of rain pouring down in an instant to prevent the monks from running home is quite delicious…Benedict’s legalism not only violated common sense, it violated love.”

Father Kardong points out that Benedict does indeed redeem himself in the story. Trapped into doing the right thing and perhaps realizing his sister’s desire was in accord with divine love, Benedict switches gears and stays up all night in a delightful exchange with his beloved sister. Their communion in spirit is a type of “viaticum” preparing them both for the paschal journeys that lay ahead.

Because of my many years as hospice social worker and chaplain, I have frequently viewed this story of Benedict and Scholastica through the lens of “nearing death awareness” as described by hospice nurses Maggie Callahan and Patricia Kelley in their classic book, Final Gifts: Understanding the Special Awareness, Needs and Communications of the Dying.
Callahan and Kelley describe “nearing death awareness” as a deeply felt intuition in the dying that death is approaching. They note that terminally ill patients are highly reflective in their final weeks and days, focusing their energy on questions of meaning and completing unfinished business.

The hospice nurses affirm that “nearing death awareness” is very common to the dying, universal in scope, and can be seen in various ways. Some people will talk of preparing for a journey. Some will start seeing people who have already died. Some will perceive a dimension outside of ordinary time and space. Others can sense the day and time of death.

Did Scholastica pray with such intensity because she knew her death was near? Did God respond so compassionately to the purity of her heart that a thunderstorm was generated to keep Benedict close?

In my hospice work I’ve learned that the dying know they are dying and it is best to lovingly respect their wishes as best we can. Many years ago, as a newly professed Sister in my twenties and long before I became a hospice worker, I visited our aged Sister Helen Hoch at the local Catholic hospital. Sister had been my fifth grade teacher and I had a great affection for her. I stopped to visit her while I was on my way to a Liturgy Committee meeting not far from the hospital. My intention was to have a short visit with Sister Helen, pray with her, and arrive for the meeting on time. I was watching the clock.

I was unaware before I visited that Sister Helen was dying, although the physical signs were present when I entered the room. She did not seem to be in great pain, but I noted her breathing was extremely labored. She was happy to see me and almost immediately told me she wanted to dictate the words of a prayer. As her former student, I dutifully began to write down her words, as she painstakingly formed them between breaths. She was asking Jesus, Mary, and Joseph, her patron St. Helen, and all the saints to be with her. She asked that Jesus be with her to guide her, defend her, and strengthen her. All the while, she was filled with deep peace and almost a radiant light. She wanted this prayer to be her final gift to me. Now almost 50 years later I still have the book where I scribbled down her words on the back page.

When I was about to leave, Sister Helen asked me if I could stay longer. Since I was not in touch with her terminal status, I gently explained I had a meeting to attend. Much to my sadness and regret, I learned shortly that Sister Helen had died soon after I left. Whenever I reflect back on that last encounter with my beloved teacher, I wish a thunderstorm would have come out of nowhere and prevented me from leaving. It was a lesson I carried with me for many years later into my hospice work.

St. Gregory concludes the story of Saints Benedict and Scholastica by explaining that the miracle of Scholastica came about because her prayer was fueled by love, quoting St. John, “God is love.” Perhaps St. Gregory is teaching us that it is communion of hearts, not following rules or getting it right, which delights God and bears eternal significance. It is attention to loving people in the present moment that opens the channels of grace. We can only pray that we, like Benedict and Scholastica, be given the grace to have a sacred last goodbye with those we love.