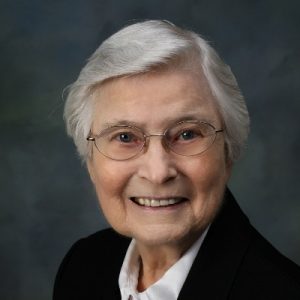 In the 1980’s Eugene H. Peterson, American theologian, writer, and poet, wrote a book describing Christian discipleship as “a long obedience in the same direction.” He wanted to stress God’s slow work of transformation in a world obsessed with instant sensations and results. When I first heard Peterson’s description, it struck me as a profound metaphor for monastic life.
Centuries ago St. Benedict in his Holy Rule described true discipleship as a “labor of obedience” for those embarking upon monastic life. Obedience for Benedict was a “blessing to be shown by all,” for it was “by the way of obedience that we go to God” (RB 71:1-2). Monastic life, as all Christian life, requires a life-long apprenticeship in obedience to God. Because obedience is a daily “on-the-job” training, the monastic community is full of mentors. One of those mentors for me has been Sister Mary Vincent Beckman.

In the summer of 1972, as a new apprentice to monastic life, I was asked to teach vacation Bible school at a small rural parish in Jasper, AL. This was my very first ministry assignment, and I was to share it with Sister Mary Vincent, a sister I didn’t know very well. We lived in a rectory trailer that the pastor had vacated for us. We worked together for several weeks teaching the children, witnessing to Jesus’s love for them, and praying the Office every morning and evening. She was a great companion, a wonderful example, and a lot of fun! Beginning that summer, Sister Mary Vincent, perhaps in ways she will never fully realize, offered me a clear example of how to live “a long obedience in the same direction.”

Sister Mary Vincent (Cecilia Catherine) was born in Sheffield, Alabama, the youngest of seven children, two of whom had died at birth. Her oldest sister, Regina, became a Benedictine Sister, Sister Cornelia, when Cecilia was only two years old. Cecilia followed in Sister Cornelia’s footsteps 16 years later, entering the monastery and making her first profession on August 4, 1946 as Sister Mary Vincent. (This year she celebrated her 74th anniversary of religious profession!)

Gifted in so many ways, Sister Mary Vincent was always at the service of others. In 1970, she received a master’s degree in music education from Duquesne University, a mastery she used in myriad ways as music teacher, choir director, and organist in schools and parishes throughout Alabama. Even in retirement she was often called upon to play the organ, sing, and lead the schola at the monastery.

Sister Mary Vincent spent many years teaching in the Birmingham area, notably at St. Clement’s and St. Paul’s Schools. I often meet her former students and friends, and they always speak lovingly of her. One of her former students, Rosemary Contri Johnson, now a parishioner at St. Mark’s Parish, cherishes her memories of Sister Mary Vincent, her fifth-grade teacher and choir director at St. Clement’s: “Sister not only taught us how to be good students but good Catholics as well. Many of the prayers and practices I learned during those years are still a part of my life today. She was kind and loving with her students, very enthusiastic and fun. You might even see her on the playground playing kickball! She garnered the respect of everyone. She will always be a very bright star in my life.”

Sister Mary Vincent taught at St. Paul’s School for 20 years and then taught another 10 years at Sacred Heart School in Cullman. When she retired from a teaching ministry spanning over 50 years, she began a more than 10-year stint at Sacred Heart Parish as full-time organist. Consistently over a lifetime, her energies, her zeal, her thrust were always to serve long and joyfully in one direction, the direction of love.

When Sister retired to the monastery in 1997, her labor of love was far from over. She was asked to play a key role in the major renovation of the monastery. She joined Sisters Mary McGehee and Mary Adrian McLean on a dedicated team of Sisters responsible for hauling furniture from one end of the monastery to the other, a team that came to call themselves, “the camels.”
Sister Mary McGehee, the coordinator of the pre-renovation moving, needed the most organized and most practical Sisters she could find to assist her. Not surprisingly, Sisters Mary Vincent and Mary Adrian were asked to serve in this capacity. Sister Mary recounted the team’s mission: “We hired the one and only moving company in Cullman, but we had to figure out for ourselves what to haul and where to put each item, floor by floor, room by room. We had to oversee moving the Sisters out of one area and into another. We had an unimaginable amount of stuff to downsize, so we decided to organize three yard sales of gigantic proportions.” The “camels,” including Sister Mary Vincent, successfully and amazingly pulled off all the hauling challenges of the renovation, and reaped considerable financial benefits for the Community with the yard sales.

As I reflect on Sister Mary Vincent’s life-long service, I’ve learned that obedience to God is demonstrated most often in the small chunks of chosen endurance that happen in the everyday course of a lifetime. The long obedience may be found in people like Sister Mary Vincent, who give over their lives to their heart’s greatest desire and then persevere faithfully in that desire their whole life long.