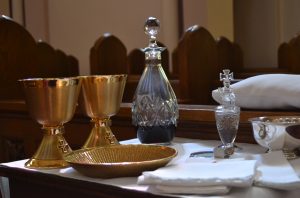 “[The cellarer] will regard all utensils and goods of the monastery as sacred vessels of the altar, aware that nothing is to be neglected” (RB 31:10-11).  This is one of the most frequently used passages from the Rule of St. Benedict on the theme of stewardship.  The role of the cellarer in the Rule is to hand out and receive back the tools, equipment, and other commonly held and used items belonging to the monastery. In our modern understanding, the cellarer was the individual in charge of maintaining the monastery’s physical assets.  While this attitude for the proper care of goods is expected specifically of the cellarer in this chapter, the “attitude of care” is one that should be possessed by all the members. One might say that this “attitude of care” is the principle feature of Benedictine stewardship and Benedictine spirituality in general.

The idea that the spade with which I dig up weeds and the broom with which I sweep the floor are to be treated as if they are the golden paten and chalice that hold the precious Body and Blood of Christ is a profound idea, if not a shocking one to those who hear this for the first time! It leads me to wonder, “If we lived in a world where everyone took this simple statement to heart, would not many of the world’s ills be solved?” Surely, the climate crisis and the egregiously inequitable distribution of resources around the world could be better handled if the Benedictine approach to stewardship was more widely observed.

Recently, the Sisters living at the monastery reflected on the purpose and the process of our recycling efforts. An article by Abbot John Klassen, OSB of St. John’s Abbey, “The Rule of Benedict and Environmental Stewardship,” was among the materials we considered. In it he writes,

Early in the age of affluence that followed World War I, an American retailing analyst named Victor Lebow proclaimed, ‘Our enormously productive economy… demands that we make consumption our way of life, that we convert the buying and use of goods into rituals, that we seek our spiritual satisfaction, our ego satisfaction, in consumption… We need things consumed, burned up, worn out, replaced, and discarded at an ever-increasing rate.’ Americans have responded to Mr. Lebow’s call and much of the world has followed.

The abbot continues by saying that the Benedictine virtue of moderation offers an alternative vision of consumption, one that is based on essential needs rather than on superfluous wants. The basis for this alternative vision is found in chapter 34 of the Rule which cites the Acts of the Apostles: “As it was written, ‘It was distributed to each one according to need.’”

Poverty was not what interested St. Benedict; rather, he was concerned that his monks have a proper attitude toward material things. He repeatedly says that each community member should have what he/she needs in order to live peaceably and focus on the more important matters of prayer and service.

Treating the tools and utensils of the monastery with reverence and care, cleaning and maintaining them properly before returning them to their place of storage, flows naturally from seeing material things as blessings from God for the support of our lives while we live on the earth and nothing more. Wastefulness, undisciplined consumption, amassing more than what one needs, and a general disrespect for created things are contrary to a peace-filled, spiritual existence.

Pope Francis offers his thoughts on the devastating effects of pollution and wastefulness in his encyclical letter Laudato Si:

These problems are closely linked to a throwaway culture which affects the excluded just as it quickly reduces things to rubbish… We have not yet managed to adopt a circular model of production capable of preserving resources for present and future generations, while limiting… the use of non-renewable resources, moderating their consumption, maximizing their efficient use, reusing and recycling them… A serious consideration of this issue would be one way of counteracting the throwaway culture which affects the entire planet. (22)

Pope Francis touches on a very important idea that St. Benedict knew very well back in the fifth century, our attitude toward material goods reflects and impacts our attitude and treatment of our fellow human beings. To love our neighbor as Christ commands us to do includes making sure that all of our neighbors both today and tomorrow have what they need to live as God intends. Care and concern for our environment, along with practicing wise stewardship of material goods, is a form of service, love, and giving glory to God.