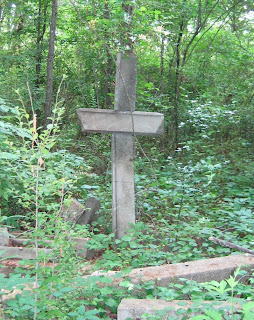 Since entering our community five years ago I have learned that we are geniuses at recycling. Sure, we do the ordinary kind where you put cans into a bin and someone carts the bin away. But that’s too ordinary for us. Our preference is to reuse things right here at home – and believe me, we can find some kind of reuse for almost anything.

We water flowers and fill the goldfish pond with condensation from air conditioner units. Discarded letters and forms are cut up into stacks of note paper. The remains of candles are melted and molded to form new ones. We know how to get multiple turns out of a single greeting card. When an old shed was taken down, the concrete pad was transformed into a shady patio. Sister Mary Adrian even has an “infirmary shelf” for pottery that breaks during firing, keeping it close at hand until another use presents itself. I’m constantly amazed at the ingenuity with which we reuse and transform.
But what distinguishes this from mere frugality or environmental care? I think it has to do with a basic Christian orientation of grateful stewardship of the many gifts God has given us. St. Benedict further nuances this when he instructs monks to care for “all utensils and goods of the monastery as sacred vessels of the altar.” (RB 31:10) Simply put, we take care of what we have, and use it to its fullest potential. It also means that when we need something new – be it a car, a chalice, or a jar of jam – we seek quality workmanship, and then give it quality care. 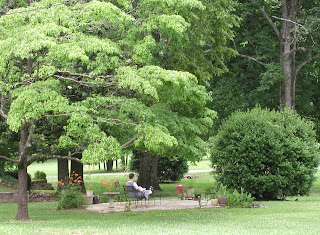 Close readers will have noted the word “transformed” in the second paragraph. This, too, is rooted in our monastic orientation. Our monastic vow of conversion keeps us ever attuned to the power of the Holy Spirit to transform us more and more into the likeness of Christ. This is fundamentally an attitude of hope, of seeing the potential of ourselves and others to grow and change. For a monastic, transformation of concrete slabs and broken pottery flows not from frugality, or even creativity, but from a hope that permeates our lives so deeply that that it is expressed even in the material world around us. If reusing is rooted in stewardship, transformation is rooted in hope and in the promise of redemption.

The cross depicted above was formed out the jumbled remains of some old concrete posts along one of our wooded pathways. This is not mere recycling. This is an expression of a spiritual reality fundamental to monastic, and indeed Christian, life. In brokenness and in hope, we offer ourselves to transformation in Christ through the monastic way of life. So it’s not genius after all. It’s hope.

From Romans 8 –
For in hope we were saved.   Now hope that sees for itself is not hope.  For who hopes for what one sees?  But if we hope for what we do not see, we wait with endurance…  For creation awaits with eager expectation the revelation of the children of God…