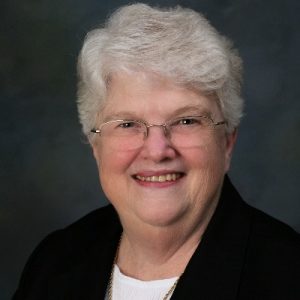 When I hear the word, “contagious,” guess what immediately pops into my mind? Maybe like you too, I instantly think of us trying to elude the very contagious Covid-19 virus for over a year. Yet during this very stressful pandemic, I’ve been reminded of something else that is terribly contagious – LAUGHTER! Charles Dickens declared, “There is nothing in the world as irresistibly contagious as laughter and good humor.”

One person who has infected me with her contagious good humor is Sister Janet Marie Flemming. When I entered our Benedictine community in 2008, Sister Janet Marie was our Prioress. Ten years later, she joined me “out on mission” in Birmingham to serve Saint Francis Xavier Church. Yes, I’ll admit that I was fearful of sharing an apartment with Sister Janet Marie, whom, up to that point, I had known only as my “boss.” Yikes! But that quickly changed.

One invaluable contribution Sister Janet Marie makes to the joy of our shared monastic life is her disarming sense of humor. To begin with, Sister Janet Marie has the ability to laugh at herself. Perhaps there are many graces behind that gift, but humility is surely one of them. Self-effacing humor can ease a stressful moment for everyone. It is contagious! Viktor Frankl who survived a Nazi death camp wrote, “When we can begin to take our failures non-seriously, it means we are ceasing to be afraid of them.” I do not know to whom to attribute this funny quote, but it reminds me of something Sister Janet might say: “I don’t make the same mistake twice. I make it 5 or 6 times, just to be sure.” The comedian Groucho Marx famously quipped, “If you find it hard to laugh at yourself, I’d be happy to do it for you.”

We can laugh at each other if it’s good-spirited and playful. Saint Benedict condemned humor in the monastery that is insensitive, cruel, undermining, or locker room baudy. Instead, we aim to honor, to please, to lift each other up, even with our humor. Sister Janet Marie has the ability to insert playful humor at the right moments and in the best spirit. Think of a funeral eulogy given with memories that left everybody laughing. That reminds me of an excellent truism: “Laughter is like a windshield wiper. It doesn’t stop the rain, but allows us to keep going.” Comedian Charlie Chaplin expressed it another way: “To truly laugh, you must be able to take your pain and play with it.”

When I asked Sister Janet Marie where she got her sense of humor, she quickly attributed it to her parents. She explained that her Dad was orphaned at age ten and was raised by an older sister during the depression with help from their Catholic parish. Despite the difficulties, Sister explained, her Dad always celebrated the joy of living and exemplified a strong faith. He passed his good humor and faith along to his children. Even though they were poor, she said, they were happy. Sister’s mother often said, “Better to laugh than cry.” William James, the famous American philosopher, historian and psychologist wrote, “We don’t laugh because we are happy, we are happy because we laugh.”

Sister Janet Marie commented that growing up in a household with such good humor and laughter helped them see the best side of a situation. This affirms what American author, Jean Houston claimed. “At the height of laughter, the universe is flung into a kaleidoscope of new possibilities.” Jesus used humor to teach his disciples to welcome his new perspective. “If one blind man leads another blind man, both will fall into the ditch.” (Matthew 15:14)

Sister Janet Marie shared with me that one of our Benedictine Sisters was encouraged through her cancer treatments by artist Willis Wheatley’s drawing called “the laughing Jesus.” The Book of Proverbs 17:22 proclaims, “A cheerful heart is a good medicine, but a downcast spirit dries up the bones.” During the sickness and death of her parents and other dark times in her
life, Sister Janet has been able to draw on the rich inheritance of her family’s good humor. She has experienced gratitude and the close presence of God within the shared joy of laughter. Clearly, Sister Janet Marie has spread that life enhancing wisdom everywhere, like a Johnny Appleseed.

Over the years, her many seeded fields in varied ministries have been teaching elementary school, finishing a master’s degree while acting as school principal, earning an LPN to serve our monastery infirmary, teaching adult religious education and RCIA in several parishes, serving our Benedictine Sisters as Subprioress and later as Prioress. Into each of these, Sister Janet Marie has spread her infectious, disarming, irresistibly contagious laughter and sense of humor. Thanks be to God!