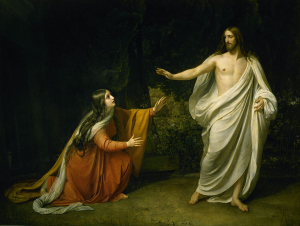 How does the human mind and heart take in the wonder of the Risen Christ? As I pondered the Gospel readings for the week after Easter, I was fascinated by the various responses to what had to be overwhelming and astonishing encounters with the Risen Lord.

Luke’s Gospel notes some of the disciples were “incredulous for joy,” others were “startled and terrified” when Christ appeared. Luke also tells us about the two disciples journeying to Emmaus who were arguing and debating with dejected hearts and troubled minds when a stranger joined them. Eventually their eyes were opened to the Risen Lord travelling with them, and they were left with “hearts burning within.”

Matthew’s Gospel speaks of the women who were “fearful yet overjoyed” when they saw the empty tomb and met the Risen Lord along the way. What were the women thinking when they were commissioned to proclaim the resurrection and assured there was nothing to fear?

John’s Gospel describes several encounters with the Risen Christ in places as varied as gardens and seashores and upper rooms. John tells us that Mary Magdalene came to the empty tomb weeping and searching, mistook Jesus for the gardener, but finally recognized the Risen Lord at the call of her name. In another scene, John depicts the Risen Jesus cooking breakfast on a charcoal fire by the seashore. The disciples did not recognize him until they made a miraculous catch of fish on his command, and speechless, they came immediately to shore convinced it was Jesus. Who else could provide such abundance from their limited human effort?

These Gospel stories in the days after Easter culminate in John’s story of Doubting Thomas on the Sunday following Easter. Thomas, not present when Jesus first appeared to his disciples, would make unyielding denials and raise huge existential doubts about the credibility of a Crucified and Risen Savior. Yet, his own heart would melt in adoration and profound faith when the Jesus invited him, and indeed all of us with him, to touch his Paschal wounds.

As I pondered on these readings throughout Easter week, it was the reading from Mark’s Gospel on the Saturday of Easter that stopped me in my tracks. There we hear about Jesus’ disciples mourning and weeping at his death. So lost and bitter they were about the death of Jesus, and with his death, the death of their own dreams, they became unable and even unwilling to hear the glad tidings of Mary Magdalene and the compelling witness of the two Emmaus disciples. They refused to believe! Jesus himself then “appeared to them and rebuked them for their unbelief and hardness of heart because they had not believed those who saw him after he had been raised” (Mark 16:14). Harsh language for these days after Easter!

For these disciples, at least for a time, the incredible news of resurrection is not credible, cannot be taken to heart by the joyous lives and testimony of others. Reading this, I had to stop and wonder, have I too refused to believe the incredible power flowing from the Resurrection of Jesus? Have I refused to see the Risen Christ in the lives of those around me?

St. Teresa of Calcutta once said, “Never let anything so fill you with sorrow as to make you forget the joy of Christ risen.” When I examine myself honestly, I do block the joy of the Risen Lord with filters of complacency, sadness, anger, hurt, distraction, weariness. I refuse to believe in the goodness of life, the goodness of another, the great goodness of our God. It is often difficult to find credibility in the Gospel’s sheer wonder and incredibility! To believe in resurrection is to be given a gift, the gift of seeing with new eyes (Marcel Proust), to see the wonder at work in the lives of those around us, the mysterious wonder at work in creation.

Someone who has helped me see with new eyes and remember the joy of Christ risen is a man who died just a few weeks ago, Dick Hoyt, a man I have only read about but have admired for many years. Like a page from the Gospels, his life gives me credible testimony that Christ has risen and is living among us still. His story is itself incredible.

In 1977 Rick Hoyt, who is quadriplegic and has cerebral palsy, told his father that he wanted to participate in a benefit run for a lacrosse player who had been paralyzed. Dick offered to push his son in a specialized wheelchair so he could run the race, and the two finished it next to last. After that first race, Rick told his father, “Dad, when I’m running, it feels like I’m not disabled.” From that point on, the Dick and Rick team participated in more than 1,000 races, including duathlons and triathlons and in 1992 even completed a run and bike across the U.S., covering 3,735 miles in 45 days. Dick and Rick began running the Boston Marathon in 1980, and together completed 32 Boston Marathons until Dick, citing health concerns, retired in 2014. Over the years, he had become an inspiration to thousands of runners, fathers, and disabled athletes, and to so many others, as a loyal friend and father who took pride in spending quality time with his son. Russ Hoyt, Rick’s brother, said at the death of their father, “He inspired people to look at all their children as equals no matter their disability.” When I view any of the YouTube videos of Dick’s life story, my eyes always fill with tears. With my own eyes I can see through the lens of Dick Hoyt’s story the power of the Risen Christ at work in the world.

No one of us has to look far to see the power of resurrection in the lives of people around us. We, like the men and women in the Gospels, live in a world suffused with the presence of the Risen Lord, who appears so often in unlikely places to unlikely people like you and me. The most incredible reality to be made credible is that each of us has immortal value. In the words of the poet Gerard Manley Hopkins in his “That Nature is a Heraclitean Fire”:
Enough! the Resurrection,
A heart’s-clarion! Away grief’s gasping, joyless days, dejection. In a flash, at a trumpet crash,
I am all at once what Christ is, since he was what I am, and
This Jack, joke, poor potsherd, patch, matchwood, immortal diamond,
Is immortal diamond.

photo: Painting by Alexander Ivanov of the Risen Jesus appearing to Mary Magdalene