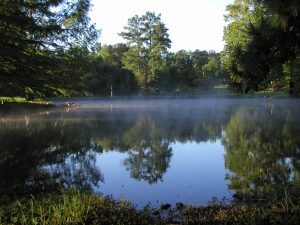 “Monastics should diligently cultivate silence at all times…” RB 42

One late summer day almost thirty years ago I found myself in the pasture of a neighbor’s farm. The mid-afternoon sun bore down on the field around me, the grasses bending under the strain of the glare. Cows stood like statues in the shade of the trees, or up to their shoulders in a weedy pond unmoving, taking what cool they could from the greenish water.

The only sound came from the cicadas, sawing away on their monotonous song which added to the incessant emission of heat simmering up from the earth. I was on a mission to escape from my own thoughts and find a bit of cool away from my home which lacked air conditioning. Sketch book and pencils in hand, I sought a shady patch near an abandoned shack of a house that had been the childhood home of my elderly neighbor. Perhaps if I found the right spot and the perfect angle, I could immerse myself in the deep shadows by peering into the open door of that shack and escape the burning world around me.

The cicadas suddenly stopped their high-pitched tune and the silence arrested me. Like the sun, it made itself known by the enormity of its presence, as if it had swallowed the day and caused everything to cease, all movement and activity became an affront as the quietness descended, demanding my full attention.

Sometimes I think about that afternoon and how it changed my perspective on silence. It was in that silence that I found myself at first becoming desperately restless, then frightened, then sad as all my thoughts began bombarding me again. There was nothing to distract me from hearing the sound beyond all the noise that typically surrounded me. That sound included something far beyond my own thoughts as I sank down onto an oak stump under the shade of an old maple tree to take it all in. In my heart, I sensed another sound that welled up from within the silence. Not exactly a word, but a movement or what some might call a knowing began to fill me. I felt lifted out of the moment and myself and no longer felt discouraged. I had experienced this at least once before, when I was a young girl, in another field on my great-grandmother’s farm. There, the silence had overtaken me one winter afternoon as my brother and I roamed the fields mottled by snow, the grasses stiff from the icy cold. In both these instances, I knew a silence that somehow brought me into the awareness of God. Though I could not put the words to it, I knew I was being deeply listened to and at the same time I was being instructed to listen too. I could not tell you what I heard in that silence, only that it surrounded me and took me into itself in a way I have never forgotten.

There is a story about Susanna Wesley, the mother of ten children, who, when she prayed, would throw her apron up over her head so that she could have a bit of solitude, removing herself from the noise and distraction all around her. Once a spiritual director told me about one of her directees, a busy wife and mother, encouraged to create a small altar space in her home. Lacking even a corner for herself, the woman arranged a small, embroidered cloth and candle on the back of the toilet in her bathroom where she would go to pray a few moments each afternoon, in relative quiet and solitude.

Silence can be a bane for some, but truly it is a gift and a necessity if we are to hear or intuit the presence of God in our hearts. Cultivating silence, as Benedict called it, requires a careful assessment of the conditions of our lives, asking of each of us the willingness to make a way, a time, and a place, however we can, so that we can avail ourselves to the voice of what St. John of the Cross called God’s first language.