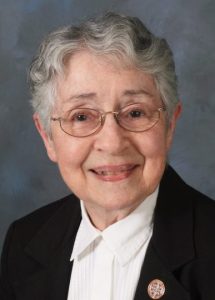 Death is not extinguishing the light: it is only putting out the lamp because the dawn has come” (R. Tagore). Dawn came for our Sister Brigid Clarke on Tuesday, May 19th, at the age of 91. It is hard for me to believe she has died. It is harder to express the unique gift she was to our Community and to my own life.

Sister Brigid has a beautiful story. She lived a long and faithful life of seeking God. Over her many years she was a wife, mother, grandmother, and professed religious. Mary Ann, her given name, entered our Community in 1983 as a widow in her fifties from Marietta, Georgia. She and her husband, Nick, had been married less than ten years before he died.

As a young widow, she found herself singlehandedly raising their four children, the youngest only a toddler. She provided for the family by working as a secretarial assistant at Georgia Tech until the children were grown. She would sometimes reflect with me on the difficulty of those years and how at times her relationship with Christ was all she had to cling to.

My first encounter with Mary Ann Clarke was in 1980 on a hot and muggy August afternoon. I was awaiting guests for a vocation retreat when I saw someone drive up in an old Volkswagen and park in front of the monastery near the Sacred Heart statue. A short woman, slight of frame, got out of the car wringing wet, with a tired smile and a resolute twinkle in her eye. She gave me a warm wet hug as she explained her car’s air conditioner had been on the blink all the long way from Georgia. I welcomed her to the retreat, sensing by her sheer determination and depth of purpose she might be destined to call Sacred Heart her home.

In the course of the weekend, although she was the oldest among the retreatants, her youthful spirit blossomed as she laughed heartily, prayed with reverence, related well with the Sisters, and even demonstrated her love of the Irish jig. My first impression: here was a woman of joy and resilience.

Within a few years, Mary Ann would enter our Community, and as a novice was given a name emblematic of the Irish ancestry she prized. She became Sister “Brigid,” with her patron Ireland’s great Saint Brigid of Kildare—a woman told to work miracles of generosity and compassion. How well our Brigid was named!

For almost fifteen years I had the privilege of living with Sister Brigid at “Crestwood House” in Birmingham when she ministered as a pastoral care chaplain at St. Vincent’s Hospital. She was particularly well-suited to minister as a chaplain because of her personal experiences and her graced ability to listen empathetically. In her eighteen years of chaplaincy, she covered the cardiac unit of the hospital and also ministered to the patients with HIV/AIDS. Those particular years posed several challenges.

In the late ‘80’s and early ‘90’s, at the time Sister Brigid was in pastoral care, HIV/AIDS was relatively new on the scene and carried some of the same fears, myths, and sense of isolation we now feel with COVID-19. Yet at that time of uncertainty she moved toward the most vulnerable of her patients and befriended them. Many nights she was called to the hospital; many times she would cry at the death of her patients. 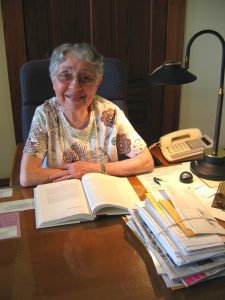 A CCU nurse, Ree Morin, who worked with Sister Brigid in those years, recently emailed me: “Sister Brigid was a special, special woman. She would automatically show up in any emergency or code situation, and wait to see what she could do. I would call her in tense situations with families. She would quietly come and defuse the situation, praying for everybody. I have often thought of her and smiled. She made a lasting impression on my life.”

I can attest to this from my years of living in community with Sister Brigid in Birmingham. From her cranberry relish at Thanksgiving to her Irish coffee on St. Patrick’s Day; from taking her turn at cooking or leading the Divine Office; from offering hospitality to our guests or just lingering at the table to discuss world events; whether laughing together or crying together or trimming the Christmas tree—she was wholeheartedly present. She delighted in the daily details of grace.

When she retired to the monastery in 2005, Sister Brigid continued her duty of delight with her Sisters, with guests, and with anyone who came her way. After her recent death, an Oblate shared an encounter with Sister Brigid: “I remember her taking my hands once and as I looked down (indeed quite a way down) into her kind face and eyes, I felt an overwhelming sense of Christ’s love filling my spirit. She was diminutive in stature, but filled the room with that unmistakable presence of Jesus.”

I will greatly miss her example, her listening ear, and most of all her friendship. I quote the words of the poet David Whyte: “The ultimate touchstone of friendship is not improvement, but is witness, the privilege of having been seen by someone and the equal privilege of seeing another, to have walked with them and to have believed in them and sometimes just to have accompanied them for however brief a span, on a journey impossible to accomplish alone.” Sister Brigid has been such a witness for me on the journey to God. May she dance the jig eternally!