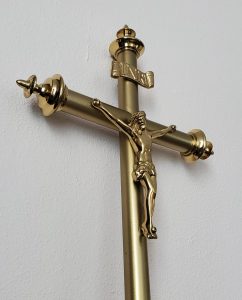 The Feast of the Exaltation of the Holy Cross is celebrated on September 14. This feast day gave me an opportunity to reflect again on the cross of Jesus and its meaning for me at this particular moment in time.

As I began my meditation, the first image that came to mind was the entrance procession of the Mass. This procession, with all its symbolism, transports me into the mystical drama of salvation enacted in each Mass. At my parish church, this procession begins at our baptismal font. Leading this procession, the cross bearer lifts high a large crucifix so that it can be seen not only by all who follow behind, but also by everyone assembled. Behind the exalted cross of Jesus are the two candle bearing altar servers, then the lector carrying the book of our prayer requests, followed by another lector carrying the Gospel book elevated for all to see, and finally the priest.

If, instead of praying, my mind has gone wandering as I await the beginning of Mass, the entrance procession restores my anticipation. I am here as a participant in this mystery enacted, not an observer. When the entrance procession begins, I spiritually place myself in that procession. Symbolically, not only are all of us presently assembled in that procession but also all the faithful throughout the world. We are all marching together, united as one body of Christ, praying for and encouraging one another along this journey of faith.

Each time I participate in the Mass, I bring my current life challenges and failures along with those of the world around me. How can we find our way on this perplexing, perilous faith journey? How can we fight the battles against institutional racism, indignities of poverty, degradation of the Earth, abuses of power? The procession reminds me. Keep my eyes fixed on that holy cross, on that suffering yet victorious One who leads the way. He reveals himself to us and guides us even in the darkest times because Jesus is the Light of the Word, a light no darkness can extinguish (Jn 1:4-5).

What could be darker than crucifixion? Thousands of crucifixions occurred along the Appian Way, outside many town walls, before and after Jesus’ time. It was state sponsored terrorism, the Roman empire’s public advertisement of its brutal power against anyone who defied Roman authority. It was the most degrading, dehumanizing, excruciatingly tortuous execution ever devised. Though so many suffered through that hideous death, we hold that Jesus’ crucifixion changed world history. We believe that Jesus’ costly suffering and death was and is a triumph, an exaltation, rather than a shameful defeat.

In the beautiful early Christian hymn in St. Paul’s letter to the church at Philippi, we read how God entered human history in Jesus: “…who though he was in the form of God, did not regard equality with God as something to be exploited, but emptied himself, taking the form of a slave, being born in human likeness. And being found in human form, he humbled himself and became obedient to the point of death — even death on a cross.” (Phil 2:5-8) 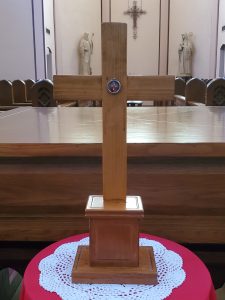 We well know how human beings can use power in self-serving and vengeful ways. In contrast, in Jesus, God’s power was used mercifully to forgive, redeem, heal and restore life. Instead of returning violence for violence, Jesus took the battle against evil upon himself. Scripture says that this battle “is not against enemies of blood and flesh, but against the rulers, against the authorities, against the cosmic powers of this present darkness, against the spiritual forces of evil in the heavenly places.” (Eph 6:12-13)

At the altar, we give thanks for Jesus’ victory in this battle over sin and death, we claim God’s loving forgiveness, we feed on the nourishing bread of his Word, and receive the powerful gift of his full presence in his precious body and blood. At the end of Mass, the altar server again takes up the large crucifix, turns it toward the congregation, lifts it high, and leads the procession out into the world to love and serve Christ there. Again, I spiritually place myself in that renewed throng on the journey, following the victorious Jesus into the world. As I gaze upon that holy cross, I hear in my heart Christ’s challenge: “If any want to become my followers, let them deny themselves and take up their cross daily and follow me.” (Luke 9:23)

Saint Benedict encourages us to take up Christ’s challenge: “What, dear brothers [and sisters], is more delightful than this voice of the Lord calling to us? See how the Lord in his love shows us the way of life. Clothed then with faith and the performance of good works, let us set out on this way, with the Gospel for our guide, that we may deserve to see him who has called us to his kingdom (1 Thess 2:12).” RB Prologue 19-21