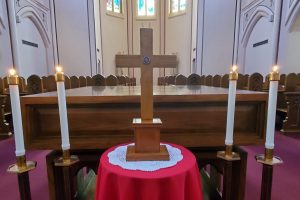 One of the things I have appreciated most about my Benedictine formation is the way in which it has expanded my knowledge and appreciation of the liturgical aspects of our Catholic faith. Even though I attended daily Mass before entering my community, I was not aware of the fullness of the Church’s liturgical calendar. Daily Mass on a feast day seemed much the same as on any other day.

One of the feasts that I was unaware of in 1985, but which I treasure greatly now, is the Exaltation of the Holy Cross on September 14th. As assistant sacristan I learned that the monastery possesses a simple wooden cross with an attached reliquary containing a sliver of “the true cross.” At the time, those of us in formation would joke about how large the “true cross” would be if all of the relics from across the world were put back together. Still, the practice here at Sacred Heart Monastery of placing the very simple cross in its stand on the altar during Mass and then spending time in prayer before it after Mass touched me deeply then and continues to do so now.

As a cradle Catholic, I grew up with crucifixes, but not the cross without a corpus. The idea of venerating the cross itself was new to me, but because Jesus died on a cross, the cross itself has been made holy. This is expressed in a hymn we sing on this feast, “Sing, My Tongue, the Song of Triumph” written by Venantius Fortunatus in the sixth century. I love verses three and four that directly address the cross:

You can listen to it here:
https://www.youtube.com/watch?v=A6cBapPnl90
Lyrics from the video
1 Sing, my tongue, the song of triumph,
Tell the story far and wide;
Tell of dread and final battle,
Sing of Savior crucified;
How upon the cross a victim
Vanquishing in death he died.

2 He endured the nails, the spitting,
Vinegar and spear and reed;
From that holy body broken
Blood and water forth proceed:
Earth and stars and sky and ocean
By that flood from stain are freed.

3 Faithful Cross, above all other,
One and only noble tree,
None in foliage, none in blossom,
None in fruit your peer may be;
Sweet the wood and sweet the iron
And your load most sweet is he.

4 Bend your boughs, O Tree of glory!
All your rigid branches, bend!
For a while the ancient temper
That your birth bestowed, suspend;
And the King of earth and heaven
Gently on your bosom tend.