Amidst the humming and whirring and mechanical music of the various machines here at the monastery, I sometimes wonder whether there are invisible fermatas hanging in the air above them. Things break here just like anywhere else. But in general, things seem to last a whole lot longer in the monastery than in any other place I’ve ever been…longer than a half note, longer than a whole note, longer than any reasonable expectation of how long a piece of equipment should keep singing decades after it should have sputtered into breathless brokenness. Surely, there must be fermatas dangling over their heads telling them to “hold on.”

Two incidents yesterday had me wondering about invisible fermatas. First, for a while now I’ve had my eye on two laundry carts for which the original canvas liners are finally past their point of appropriately holding our laundry. The liners need to go, but the cart frames themselves are still as sturdy as on the Bronze Age day they were born. As we measured for replacement liners, I figured that the last time these carts were measured, it was probably in cubits. Yet even after all these eons the frames are still holding up, and holding on. The replacement liners arrived yesterday morning, hopefully ensuring a least a few more decades of noble endurance.

Then yesterday afternoon, I had to call a specialty parts company about a replacement part for another piece of equipment. I gave the model number to the clerk. After a couple of phone calls back and forth I was told in disbelieving tones that the piece was made in the 1950’s. “No replacement parts are available,” she said. “You’ll need to buy a new machine.” “Ha!”, I thought. “She can’t see that fermata hovering in the air.” I jumped on-line, found a similar part from another maker, and now there’s no reason to think we can’t make it to the 2050’s with this same piece of equipment.

Of course it begs the question – is it the fermata, or is it simply the Benedictine way of caring well for the things entrusted to our care? St. Benedict tells us to care for the goods of the monastery as if they were vessels of the altar. And so we take seriously the responsibility to steward well the things that hum and whirr and make the mechanical music that accompanies and helps sustain our life. Stewarding well the things of the monastery has the effect of placing a little fermata above each one, both telling them to hold on, and helping them to hold on.

The term fermata comes from the root Italian word fermo, which means strong or fastened, and from the earlier Latin firmus, which means firm or stable. Here in the closing days of Lent, I feel as if I’m standing under the sign of a fermata, telling me to be stable, to be strong, to keep holding on, to steward well these precious days. 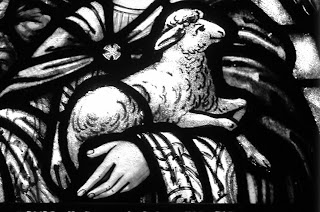 Paradoxically, I stand in pieces, needing replacement parts for a brokenness that reaches at least as far back as the Bronze Age and should probably be measured in cubits and shekels.