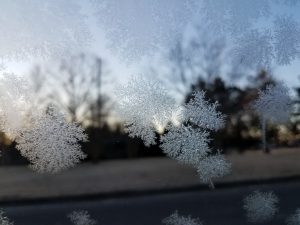 I have always been an early riser, except in the winter when the dark, cold early mornings tempt me to remain under the warm covers for just a few minutes longer. Over the past year, a friend and I established a new pattern, although it happened somewhat by chance. We agreed to walk together two mornings a week. At first, it started out as a leisurely stroll in her neighborhood, a meandering trail of winding streets and country roads. Sometimes we walked in my neighborhood, a circular route but replete with several steep hills that cause us to catch our breath and push through.

Back in the spring, as the pandemic was ramping up and none of us yet realized the long haul we were in for, we simply fell into a routine of ending our walks with a visit on her porch or mine, depending on the day and our various demands. At that time, she was in the midst of both chemotherapy and radiation for breast cancer. Surgery came in May, a double mastectomy, with ongoing complications. Amazingly, each time I texted her to see how she was doing, she would say, “Let’s walk tomorrow,” or the next day or the next. We managed to continue walking, adapting to her abilities for the week, throughout the summer and fall. Then we decided to meet up at a local park, which offered her the chance to drive for the first time in months and to simply be away from the confines of her house and her well-meaning though hovering family. Those few minutes alone in her car represented glorious independence for her and reassured her that she could still drive and do some things on her own.

As winter came on, we found ourselves questioning how we would handle the inclement weather, especially early in the morning. We opted to try meeting at sunrise at the park, as often as possible, depending on her condition and our individual daily demands. Surprisingly, we found ourselves both dreading the frosty mornings. Yet we would realize as we stumbled out of our vehicles in the parking lot, struggling with an abundance of scarves, hats, masks and layers of thermal clothing, just how glad we were to see each other. We were both choosing to socially isolate from all others except those in our own households, so seeing a friend in person felt clandestine yet invigoratingly joyful. Quickly, the ducks and geese who gathered in those early misty mornings became our companions. The park was sparsely peopled at that hour, but the sun rising above the lake seemed to be greeting us. Or else we reveled in the gray dawn shroud that made the trees seem dream-like, as deer and squirrels would emerge suddenly from the snow-bent, brittle grasses.

We became the winter women, bound by faith and folly, there to praise the day before anyone and anything else could lay claim on our time and attention. Each morning became an exercise in fortitude, as neuropathy, nausea, and the nagging cold challenged my friend and me as her witness to push through for the delight of seeing the daybreak and having it to ourselves. The ducks laughed uproariously, and the geese simply stretched their necks to follow our progress past their high-stepping and preening wariness. Slowly, some mornings slower than others, we would conclude the trek around the lake by resting on benches well set apart. Facing one another we talked and planned, complained at times, dreamed and prayed our way into another day.
Each time the weather forecast indicated even colder temperatures, I felt challenged. I considered whether we should stay home so she could stay in bed and rest, and I was tempted to cancel. But then she would text, “Let’s walk,” and of course I said, “Meet you there!”

“This, then, is the good zeal which monks must foster with fervent love. They should each try to be the first to show respect to the other, supporting with the greatest patience one another’s weaknesses of body or behavior, and earnestly competing in obedience to one another. No one is to pursue what he judges better for himself, but instead, what he judges better for someone else.” So, says Benedict in the 72nd chapter of the Rule. So, say my friend and I.