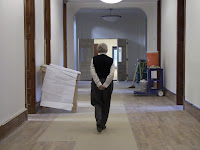 I have recently been reflecting on Abraham Lincoln’s famous Thanksgiving Proclamation of 1863. It is a beautiful, noble, evocative – even tender – acknowledgement of the blessings that do not stop falling from the heavens and coursing through the land even as crushing tribulations rend bodies and souls.
Lincoln wrote in time of war, but even trials less rending than those of combat offer us their particular pain, however small, like a garnish of suffering on a plate of plenty.
The co-mingling of pain with plenty that we all experience to varying degrees can leave us not only uncomfortably struggling through the contradictions and complexity of our humanity but also poised in the betwixt and between of what has been and what we hope will be. 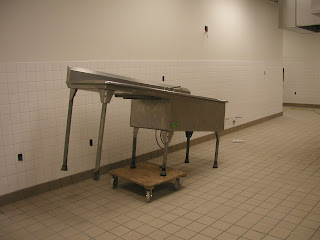 Our Thanksgiving celebration here at the monastery has taken place in such a gap. We are part way through our move back into Ottilia Hall after a long, sometimes challenging, exodus away from our main monastery home. Most of us are now back in Ottilia. Some of us have yet to move. About half of our kitchen equipment is in our future kitchen. About half remains in the current one that now looks sadly shorn and forlorn. Our library is packed in boxes and our offices are still in transition. The Retreat Center move is yet to come. The dirt and disarray of construction that has accompanied us for over a year will be present for at least the year to come as we move from Phase II to Phase III of our project.
It is not war. It is not the fury of fire or storm. And our challenges are often even awash in a golden sheen of joy and anticipation as our long sought goal unfolds before us. Nevertheless, in our own small way, we are poised betwixt and between, neither fully here nor fully there, living in a gap between what was and what will be.
It is, of course, part of the human condition. Every day each of us puts one foot in front of the other, leaving behind the surety of former footfalls and stepping over a chasm of mystery into the uncertainly of the footfalls beyond. 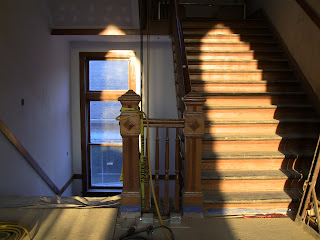 Strangely, though, this gap between what was and what will be can sharpen our sense of what is – both the pain and the plenty. Lincoln conveyed this sharpened sensitivity as he beautifully articulated the many blessings bestowed upon the country even as the land was still draped in the chaos of battle.
I think our community has also experienced that sharpened sensitivity as with the rest of the country we paused for a day of Thanksgiving to the Lord for what has been, what is, and what will be. God’s goodness showers upon us daily – even in the midst of construction, which is itself a manifestation of God’s manifold blessings.
Characteristic of the Psalms of lamentation is that they incorporate a note of praise or thanksgiving. It seems odd, doesn’t it? But I think the Psalmist was writing from within the gap, poised between surety and uncertainty in a gap called faith, a faith that sees blessings falling from the heavens and coursing through the land even in the midst of tribulation – whether the rending of body and soul or simply a garnish of suffering on a plate of plenty. 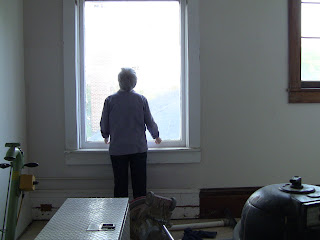 Gratitude is not a feeling of happiness for good fortune. It is a stance of humility before the mystery of manna that falls ever gracefully across even the fields of our failures. And it is a stance of faith as we hover, even if fleetingly, across the chasm of mystery that lies between one footfall and the next.
Lincoln uses the word “acknowledged” to describe the act of giving thanks for the “gracious gifts of the Most High God.” Such acknowledgement is rooted in humility and in faith as we turn our gaze away from ourselves and toward God as the source of all “such singular deliverances and blessings”
For all the blessings that were, that are, and that will be, thanks be to God! 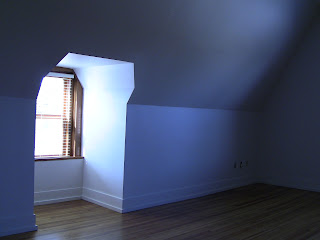 Postscript: Remembrances of those in Syria, Gaza, the Northeast U.S., and all those suffering in such dire and dangerous situations have not been far from our thoughts and prayers during this Thanksgiving weekend.  ﻿May peace prevail.