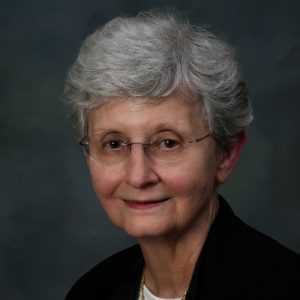 When I recently spoke with our Sister Treva Heinberg about her call to Benedictine life almost 70 years ago, she mentioned this particular story as one of her favorites. I sensed the wisdom of the tale revealed her own deeply-rooted conviction—God is in the daily, God is in the here and now, God is already present within us. Perhaps the story captured something of what her long Benedictine life has been—finding God in everyday life and helping others do the same.

Born in 1935 to her parents, Mamie and Lep Heinberg, in Pensacola, Florida, Sister Treva was the younger of two siblings, her sister Mailene born five years earlier. After owning drug stores in Tampa, her Jewish father had moved the family to Pensacola and worked as an accountant in several administrative positions. Despite her sister’s ill health, Sister Treva remembers the family enjoyed a happy life together. No doubt she inherited her father’s administrative skills and her mother’s kindly nature and good sense of humor.

Treva attended St. Stephen’s Elementary School in Pensacola from second to eighth grade. Thriving in the Catholic school environment, she came to understand that religion was the most important part of life. The Benedictine Sisters who taught her had a formative influence. She saw in them a deep caring for people and a great generosity of service.

She was aware that the Sisters ran an Academy at Sacred Heart in Cullman, and she asked her parents if she could attend. She was delighted they approved, and she left home for Sacred Heart in 1949. A few months into her freshman year, tragedy struck. She was immediately called to Pensacola because her father had had a sudden heart attack and died shortly afterward. Despite the family grief, Treva was able to continue her education at Sacred Heart Academy, and shortly after graduation entered the Benedictine Community. Treva had found a new home.

Among the postulants who entered the Community with her in 1953 were Sisters Regina Barrett and Jane Bishop. I asked them recently how they would describe the young Sister Treva. From the start, they said, she was highly intelligent and studious; she was fun-loving with a great sense of humor; she was generous in sharing her personal gifts and grateful for the smallest of favors; she was always steadfast in her commitments and has proven to be a most faithful friend. I imagine anyone who has known Sister Treva over the years could attest to these same special qualities.

Sister Treva, along with Sisters Regina, Jane, Margaret Frederick, and Augusta Hamel, entered the monastery about ten years before the Church, and religious life along with it, reached a crossroad. Vatican II took place in 1962-65, and with it a profound paradigm shift in religious life was about to happen. These words were to energize a new generation of Sisters:
The joys, the hopes, the griefs and anxieties of the men [sic] of this age, especially those who are poor or in any way afflicted, these are the joys and hopes, the griefs and anxieties of the followers of Christ. Indeed, nothing genuinely human fails to raise an echo in their hearts. (From the Constitution on the Church in the Modern World, 1.)

Sister Treva told me she became “sold on Vatican II.” She grappled with the unsettling shift from viewing monastic life as “separation from the world” to an “embrace of the world,” and she assisted the Community in countless ways to renew its vision and begin the slow, painful journey of opening up to a world in great need.

Sister Treva did this by offering her gifts both within the Community and within the local church. With many gifts, she was able to serve the Community in several capacities, notably as Chair of Long-Range Planning, member of the Monastic Council, and Federation Delegate. She was elected Prioress in 1991 and served until 1999, and then later after retirement, served as Subprioress for Prioress Tonette Sperando from 2015-2021.

She shared that her quest and her challenge has been obedience, “preferring nothing to the love of Christ” (RB 4:21). She told me, “In my quest for God it seems it was always others who led me: my superiors and my Sisters. Obedience was doing what was asked of me to the best of my ability. It is amazing what God can do, if you allow.”
Also serving in ministries within schools, parishes and diocesan programs, Sister Treva touched the lives of many people. Sister told me, “I have taught all eight grades, high school, and college.” Quite an accomplishment to teach at all levels! She would add, “with varying levels of success.”

Sister Treva told me she especially enjoyed teaching theology and psychology, and using her training in these areas in other ministries. She reflected back on her ministries as expert witness in the Diocesan Marriage Tribunal, Diocesan Diaconate Director, and RCIA Director in parishes: “It did my heart good to see the happiness of people when they were reinstated in the Church as well as when they embraced God through the Church.”

Sister Treva reminded me that it was she who drafted our Community Philosophy (https://www.shmon.org/community/philosophy/) in 1972. In that year, shortly after the close of Vatican II, the Sisters shared in small groups about the essence of life together as Benedictines. She was asked to take the words of the Sisters and draft the document. She has been amazed how it has remained core to our self-understanding over the past 50 years. She feels it was truly an inspired document, true to the spirit of Vatican II and to our lived experience.

When I asked her about the future of religious life, Sister Treva was convinced a life of seeking God will always be present, but perhaps taking different forms. Her vision of the future is clear, however, recalling again the story of the preacher and the old monastic: if God is already in our lives, God will also be in our future.
Sister Treva summed up our conversation, “Life is a journey to God and we must help each other on that journey.”