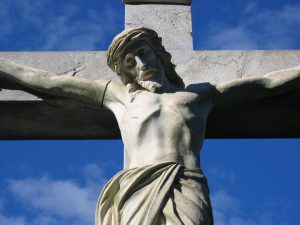 As we journey through Lent, the daily and Sunday scriptural readings remind us of a Jesus who experienced rejection, opposition, and suffering. All of us encounter, at some time in our lives, suffering whether it be physical, emotional, psychological, or spiritual. When suffering is the type that is prolonged or even terminal, we are drawn to ask “Why, why me, Lord?” In this suffering, we can identify in a special way with the dark and uncomfortable feature of Jesus’ life; for such brokenness and pain are part of our own lives.

Shortly after World War II, a play call The Sign of Jonah was written by a Lutheran minister, Guenter Rutenborn. In this play, God is on trial. Picture a courtroom with the cruelties of the war fresh on the minds and hearts of everyone. As each witness comes to the stand, God is blamed for the atrocities that occurred. Testimony includes that “He is guilty because he created humanity;” “He foresaw all the horrible actions of in humanity and yet created humans;” and “God allowed the holocaust to take place.”

The archangels, who are the defense lawyers for God, have been silent symbolizing the silent God in the face of blasphemy and anger hurled at him. Gabriel breaks the silence saying, “I will go and announce to a Jewish maiden that she is to bear a son. He will move among your sick, hear your angry voices, be rejected and end up being falsely accused. He will die in extreme agony, without friends and without support. He will feel and know what you want him to know. And he will be God Himself.”

Among other things, this play speaks of solidarity. It is a solidarity that bonds Jesus with us; that bonds a loving God with the sufferings, brokenness, and pain that we as human beings experience. As St. Paul tells us in his letter to the Philippians: “Though he was in the form of God, he did not regard equality with God something to be grasped. Rather he emptied himself, taking the form of a slave, coming in human likeness. And found human in appearance, he humbled himself, becoming obedient to death, even death on a cross” (2:6-8).

God is in the midst of a broken world. The God revealed in Jesus does not end in suffering but in glory. Pain, brokenness, and suffering have given way to NEW LIFE. Because of this, God greatly exalted him and bestowed on him the name that is above every name… (2:9).