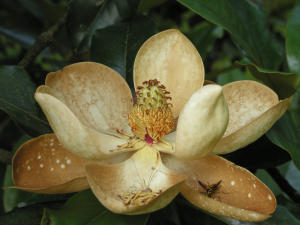 Nick Woodthorpe taught Social Studies and was the school librarian at McNair Junior High School in suburban Southern California. His classes were held in the library and thirty-six seventh graders clustered six to a table. Our primary interests were listening to our favorite tunes on transistor radios, surfing, riding bikes, playing sports, and goofing off.

My first impression of Mr. Woodthorpe was sheer horror. He was “really old,” about thirty, and stood about six feet four. Woodthorpe’s gangling primate arms hung so low that his hands seemed to dangle at his knees. His hands were enormous, furry paws. Those shoes! At least size fourteen. And he didn’t walk, he loped. For each three student steps, he took one. Once, we counted his steps from the back of the room to the front and he walked it in six steps! His neck was Loch-Ness serpent-like and topped with a tiny, pear-shaped head. A sparse, fuzzy, orange thatch of filament crowned Woodthorpe’s scalp. Woodthorpe’s Buddha-like ears looked at least five inches long and fanned outward. And oh, those doleful eyes! They aimed downward, giving Woodthorpe a hound-dog demeanor. His shiny, bulbous nose resembled a big July cucumber. His bright pink lips can only be described as Grouper-like and pulpy. To his face, we called him Mr. Woodthorpe, but behind his back we delighted in calling him “Frankenstein,” “Creature from the Black Lagoon,” or “King Kong.”

We drew pictures of him during class, on the bus, and at home. We inked cartoons of Woodthorpe in various situations and exaggerated his freakish features to entertain each other. We had a running contest to see who could outdraw the next kid with Woodthorpe caricatures. We commiserated over his unreasonable teaching demands. The chief complainer was my neighbor and friend, Zack Schumer. In addition to homework, quizzes, and tests, Woodthorpe required that we stand up and recite from memory the Gettysburg Address. We collectively vowed never to do it.

It started like any other Friday, restless and joyful in anticipation of the weekend. The arid Santa Ana winds blew, and we delighted in sparking each other with static electricity. The second-period bell rang and entering Woodthorpe’s class we threw spit-wads and exchanged last night’s Woodthorpe cartoon. Suddenly, Tommy Hudson exclaimed, “Look, Woodthorpe is weeping!” I saw him in the glassed-in librarian office dabbing tears from around his red-rimmed Basset-hound eyes. Holding a wadded handkerchief, he calmly and somberly came out and stood in the front of the room.

“Class. Class! Ladies and gentlemen! Please sit down, I have something to tell you,” he announced in his formal British accent. “Our president has been shot in Dallas and our principal, Mr. Craig, has the newscast on our intercom.” He turned up the volume and strode around the room as we listened to Walter Cronkite in stunned silence. At 11:00, Cronkite choked as he slowly announced President Kennedy was dead.

My heart raced, I couldn’t swallow, and I felt sick. We wept. While keenly listening to the news broadcast, Mr. Woodthorpe strolled among us, placing his gigantic paw on each shoulder, and patting every tearful student. He compassionately uttered comforting phrases to each of us. Mr. Woodthorpe placed his huge palm on my arm. Wiping my tears on my blouse, he gazed at me and said, “It’s a great loss to the world. Such a tragedy.” As I gazed up at his face, he looked beautiful. In a face I once found repulsive, I saw magnificence and splendor. I realized instantly that Mr. Woodthorpe loved us: He most likely knew of our antics and mischief, but he loved us anyway. Pangs of guilt swept over me, and I felt terrible for participating in the ridicule and scapegoating. I asked myself, “Why have I never noticed how beautiful he is?” Inwardly, I felt terrible that I had participated in condemning him and drawing cartoons. It seemed incredulous to me that I ever thought he was repulsive.

We returned to school on Tuesday, 26 November, after witnessing Lee Harvey Oswald shot on live television on Sunday followed by a National Day of Mourning. After plopping down his books, Zack remained standing and declared, “I’m ready to recite the Gettysburg Address, Mr. Woodthorpe.” We had been practicing together for four days and I was the second one, followed by Cindy and Junior. Those who were too shy to recite it aloud to the class were allowed to deliver it privately at his desk.

Four days had changed us forever. The cartoons and caricatures stopped. We treated Mr. Woodthorpe with respect and admiration, as our knight in shining armor. We took up a collection and presented him with a monogrammed wallet at the end of the school year.

We lovingly reminisced about Mr. Woodthorpe at our fiftieth high school class reunion in 2019 and were saddened to learn of his death in 2014. Cindy stated, “He was a magnificent person. I bonded with him when Kennedy died.” Several of us agreed with her. Sin is ugly. The crucifixion was ugly. How we treated him behind his back was ugly. Mr. Woodthorpe? He was absolutely beautiful.

By Jan Vinita White, Oblate OSB
*Out of respect for privacy for those involved, all the names and places have been altered in this story.