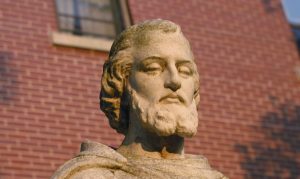 Since this is the Year of St. Joseph it is good to consider from time to time the values portrayed by this great saint. St Joseph is considered a “manly man” and what an example he is to all men. But not just to men – all of us can learn from his example. Although we have very little scripturally to go on, what we do have speaks volumes.

As we peruse the Gospels we are first introduced to Joseph when he is told to take Mary for his wife even though she is pregnant, not by him but by the Spirit.
We don’t know if he questioned this revelation, fought against it, or merely accepted it. What we do know is that he listened and acted upon it. We don’t know what transpired between Mary and Joseph during those nine months before the birth of Jesus. Mary was away three months tending to Elizabeth in the latter’s confinement but what about the other six months? They must have been very fragile times where Joseph and Mary were learning to know, accept, and trust one another. It surely was a tenuous time for both of them.

The next time we see Joseph, he is journeying with Mary to Bethlehem to fulfill the census decreed by Caesar. It is also the time for Mary to give birth to Jesus. Again, we have nothing voiced by Joseph but we do know he did what he could to secure a private and safe place for Mary to give birth. When there was no room in any inn, he was reduced to finding a warm and safe place for her.

Not long after that, Joseph heard in a dream to flee Bethlehem in order to safeguard the life of Jesus. With his family he finds solace in Egypt where they begin their new life as parents among strangers in a strange land. When all is safe he is told in yet another dream to return with his family to Nazareth where, once more, he takes up his “normal” life. It is approximately fifteen years later when we hear that Mary and Joseph were frantically looking for Jesus after they made their obligatory visit to Jerusalem. That’s it. We hear nothing more about Joseph. Or do we?

Let’s revamp. First of all, not a word spoken by Joseph is recorded in Scripture. What we can assume about Joseph is what we see in and through his actions. He listens to his heart and to what is spoken to him in dreams. He listens… Then he responds. Each time he responds it is for the good of others; first and foremost, for Mary, then for his family, and eventually for Jesus. For me, Joseph is a man for others. He is one who cares for others, putting their needs first. He does whatever he can to provide, protect and teach and we know this through his actions rather than words.

But there is still more, and for that I look to Jesus to give us an insight about his foster father. Jesus took on our humanity. He wasn’t born in a bubble. Therefore, he had to learn the ways of life as we had to do. He was taught how to walk and talk and most importantly how to love and care for others through his parents. As a young Jewish boy, he went with his father to the synagogue learning about God, the Scriptures, and the Jewish way of life. I would image that Joseph also taught him his trade so that he would be a productive citizen.

We all know about Jesus, but have we ever thought that he might not only be a reflection of God the Father but also the reflection of Joseph as well? Joseph was a listener and so was Jesus. He listened to the hearts of people, to the feelings behind their words and responded to their needs. If he emptied himself of his divinity, his love, his joy at festivals, his care for the sick, the sinner, and those who mourn might they not come from what he learned from his earthly family? His teachings were at the core of the original Jewish teachings given by a God who cared for his people. What a combination of words put into practice!

That brings us to Benedict. The first word of his Rule was to listen. The rest of the Rule was putting what is heard into practice – care for the young, the old, the sick, the wounded in body mind and spirit. Benedict also show us how to reinforce our relationship with God and one another through prayer and good works to help us strengthen our resolve to be people of God, to show forth God in our lives. Did Benedict use Joseph as his example? Did Jesus? I think so on both accounts.