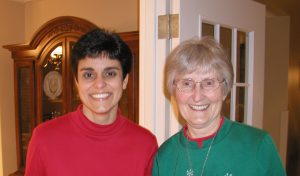 “We have said that all should be called for counsel because God often reveals to the younger what is best.”  RB 3:3

In no place is age to determine rank in community.” RB 63:5

I recently attended a symposium that centered on the topic of intergenerational living. The speakers were excellent, and it was good to finally attend an in-person meeting where I could reconnect with Sisters from other Benedictine communities.

Before I entered my community, I lived alone in an apartment in Atlanta. I experienced people younger than me as a dance teacher, but I had very little contact with elders. Most of my social life was spent with age peers.

I came to my Benedictine community seeking God and a spiritual life. I didn’t come for intergenerational living, but it has been a blessing in my life. I entered at a time when there were very few women entering religious life in general. Some of the few peers I had at that time have left. From this experience, I would say that having peers in community is helpful but not essential for a healthy religious life. So many of my elders in community have become dear friends and role models.

Many of our original Sisters were of German heritage serving a German-American community here in Cullman. Sister Ursula Weiss was our only German Sister in 1985 when I entered. She was tall, stately, and intimidating, but underneath the crusty exterior, she had a soft heart of gold. One of my most treasured memories of her is that every morning as I went out the back door on my way to teach at Sacred Heart Elementary School we would cross paths as she was leaving the dining room. She would always flash her beautiful smile and say, “Stay good!”

Once, when I was upset with her for something she said, I challenged her about it. If I had more humility and more compassion I wouldn’t have done it. She didn’t say a word after my outburst, but she came and found me later saying, “I’m sorry.” She was in her 80s. I was in my 30s. I was both humbled and edified by her humility, faith, and love. What a role model she has been for me.

There are so many stories I could tell about so many Sisters, both living and those who are already with the Lord. Living monastic life with women of several different generations is both rewarding and inspiring. I will close with the words of Pope Francis.

“[I]n the consecrated life, we have to remember that we can never renew our encounter with the Lord without others; we can never leave others behind, never pass over generations, but must accompany one another daily, keeping the Lord always at the center. For if the young are called to open new doors, the elderly hold the keys. An institute remains youthful by going back to its roots, by listening to older members. There is no future without this encounter between the old and the young. There is no growth without roots and no flowering without new buds. There is never prophecy without memory, or memory without prophecy. And constant encounter.” (2018 Homily for World Day of Consecrated Life)