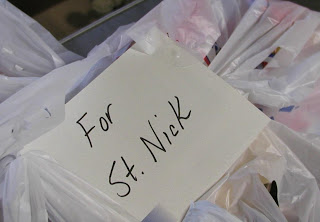 It was an innocuous trip to the back porch this afternoon, but I seem to have caught St. Nick in the middle of a task. Lists were prepared, paper sacks were arranged, fruit was at hand, and an ample supply of candy filled a couple of grocery bags. St. Nick was nowhere to be found, so I snooped around for a bit and took a few snapshots.

The Feast of St. Nicholas is not commonly celebrated in the U.S., but it is a long-standing tradition in Germany. The earliest Sisters in our monastic community were primarily of German heritage, the town of Cullman was founded and settled by German immigrants, and we are a great-granddaughter house of the Abbey of St. Walburga in Bavaria. Given this background, a number of German traditions were incorporated into the life of the monastic community. We still retain some of these, and celebrating St. Nick’s Day is one of them. 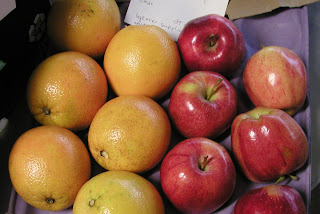 On the Church’s calendar of saint days, the Feast of St. Nicholas falls on December 6. On the eve of the 6th, each Sister puts a shoe outside her bedroom door and awakens to find it filled with a sack of fruit and other goodies. It’s a fun, simple tradition, and a treasured legacy of our earliest Sisters.

While our spiritual and religious traditions are paramount, simple community traditions such as this help knit us into a family and connect us with the Sisters who lived this life before us, who lived in the rooms we now inhabit, put shoes outside these same doors, and worked on the same tables that now hold sacks of St. Nick goodies.

As I snooped around amongst the fruit and candy this afternoon, I took a good look at the lists of names. We find our names on all kind of lists around the monastery – readers for Mass, candle bearers for processions, cantors, table decorators, and the like. Yet there is another list of prime importance to us – our Book of the Names of the Dead, which was displayed in the chapel during the month of November. Our lives are intimately connected with those listed in that book. They are the ones who formed us, passing on the tradition of seeking God through the monastic way of life, as well as the particular traditions of this community, from Sister to Sister and generation to generation. When I place a shoe outside my bedroom door on Sunday evening, I’ll do so conscious of the close connection between the lists of we, the living, and the list of those who helped build, form and shape this monastic community. They, St. Nicholas, and all the saints, have given us a treasured legacy indeed.