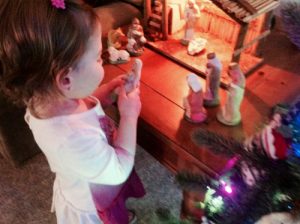 In my childhood years, before I learned to read a calendar or had developed a sense of time, I must have asked my mother at some time, “What day is Christmas?” I can hear her instructive words to this day: “Christmas always falls on December 25, and it is preceded by four weeks of Advent as a special time to prepare for Christ’s birth. We do not put up the Christmas tree, the manger scene, or any other decorations until December 15. The Advent wreath is the only decoration for right now, and we will light a candle for each week of Advent. When the fourth candle is lit, then you will know that Christmas is only a week away.”

As our family excitedly delved into the Christmas decoration boxes after December 15, the tree was the first decoration to light up its central location in the living room. As the oldest child, I had the pleasure of setting up the manger scene. I would invite each of my brothers and sisters to choose a figure or animal to place in the manger scene. After that was accomplished, I would place the baby Jesus in the hay-filled manger, and together we would all sing “Away in a Manger.”

Throughout the Christmas season, I would frequently catch one of my brothers or sisters rearranging the figures or talking or singing to them. My childhood memories of the relevance of the manger scene stayed with me throughout my adult years. I always made sure I placed the manger scene in a special place in my house in order to assure a prayerful Advent environment of expectant waiting for a renewed coming of Christ in my heart at Christmas.

After entering the monastery, I frequently arranged the central nativity set on our first-floor hall with its wooden stable structure and life-sized statues of Mary, Joseph, baby Jesus, angels, animals, and shepherds. The three Kings were always placed a distance away from the stable and moved closer as the Feast of the Epiphany approached. Lighted trees surrounded the stable and a floor lamp illuminated the holiness of the true meaning of Christmas for all to contemplate. During the last week of Advent, I would frequently take time to sit in silence before this holy scene to contemplate the mystery of the Incarnation so as to be ready for God’s gift of love on Christmas day.

I am pleased that the faithful practice of preparing the Nativity set has been a priority for my family. A few years ago, one of my sisters shared with me that as she was babysitting her 18-month-old granddaughter Jordan, Jordan seemed to be captivated with the Nativity set. She just stood in a quiet stance, and with her big inquisitive eyes seemed to be taking everything in. Her eyes focused on the statue of Mary, she picked it up, gazed at it, her eyes meeting Mary’s eyes. She began talking to Mary, in infant gibberish, of course, and then began kissing Mary. The next morning, as my sister was leaving for work, she just happened to glance at the manger scene as she was headed out the door and noticed that Mary was missing. She looked all over the house and finally found Mary in a basket with all of Jordan’s favorite stuffed animals.

I think this event was an Annunciation story for Jordan. Somehow, she knew that Mary was special. What was she thinking? What was she feeling? What was she pondering? Was it an “inner knowing?” I will never know what she was thinking, feeling, or pondering. She could not vocalize her inner knowing and she probably does not remember this sacred moment. But somehow, I believe it was an Annunciation moment for her, a formation period for her, somehow forming her for all the “fiats” of her life.  Jordan’s sharing of Mary with her stuffed animals, whom she probably communicated with on a regular basis, is evidence to me that God was already working within her to birth and share God’s life with others. My sister shared with me that Jordan continues to set up the Nativity set every year. She is now nine years old! And this memory stays with me each year as I contemplate my own “fiat.”

Just this past week, another one of my sisters sent me a picture of her Nativity set. Her five-year-old grandson Brody was visiting her one evening. She noticed him sitting in front of the Nativity set and playing with the various figures. As he was leaving, she noticed all the figures were laying down. He gave her the following directive: “Nanie, I put them all to bed. Be sure to wake them up in the morning!” What an example of manger fascination!

The Nativity set remains a faithful tradition in the monastery today. Our Nativity sets from various countries around the world and our traditional monastery sets are now displayed in the halls and various rooms for all to view as they enter our sacred space. As we pass by them over the next week, we pray that this final week of Advent will prepare us for a glorious Christmas celebration.