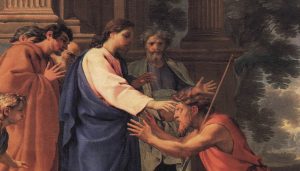 “The best and most beautiful things in the world cannot be seen or even touched. They must be felt with the heart” (Helen Keller). This week as I used the readings for the Thirtieth Sunday of the Year for my prayer and lectio, I was moved by the ardent faith and courage of the blind man Bartimaeus in Mark 10: 46-52. Meditating on Bartimaeus also led me to reflect on the extraordinary life of Helen Keller that has inspired me ever since I was a child. Both stories reflect transformative experiences of grace and healing, not only for their own lives but for the lives of those around them.

Scripture scholars tell us that in Mark’s Gospel the placement of any story and its contrasts contribute to its meaning. Bartimaeus is the second blind man cured in Mark’s Gospel, the first being a blind man of Bethsaida in chapter 8: 22-26. In the first instance, the blind man of Bethsaida was brought to Jesus by others, and after Jesus took him to a private place, put spittle on his eyes and laid hands on him, the man could see. But he was only able to see in an embarrassingly limited fashion with “people looking like trees and walking.” Jesus laid hands on him a second time, finally enabling him to see clearly and distinctly. Jesus told the blind man to go home, not into the village, and gave no mention of following him on the way.

Separating the stories of the first blind man and Bartimaeus are chapters containing three Passion predictions. Is there a message hidden there? The call of Jesus is a call to die to self. Is the evangelist Mark challenging his readers to consider that some disciples, perhaps ourselves included, are like the first blind man, in need of remedial work, because of fuzzy-eyed notions of what it means to follow Jesus? Is there an implication that some disciples need a corrective lens to see where real discipleship leads?

The story of Bartimaeus is strategically placed in the Gospel directly after the “status seeking” story of the ambitious Zebedee sons, James and John: “Lord, grant that in your glory we may sit one at your right hand and the other at your left.” How easy it is, like James and John, to look for glory in all the wrong places!

When Jesus encounters Bartimaeus several verses later, he asks him the same question he asks James and John, “What do you want me to do for you?” But what a contrast in response! Bartimaeus replies, “Master, I want to see.” Bartimaeus seeks no special privileges but only to have his eyes opened to the wondrous spiritual, social, and material realities that are only made possible when God becomes the center of your life.

The story of Bartimaeus shows us a man whose healing moves him from the fringes of society to its center. Unlike many others healed by Jesus, he has a name and is associated with a family. He suffers persecution when he cries out, he receives a vocation in the midst of his brokenness, he unwaveringly seeks healing. In the midst of physical blindness, his faith was far deeper than the spiritual blindness of Peter, James, and John.

Bartimaeus throws off his cloak, and in doing so, casts aside his most precious possession (unlike the Rich Young Man in chapter 10). He springs up from his low position to meet Jesus. He acknowledges Jesus as the Son of David and Master. He desires healing from every kind of blindness. Healed to become a fully-seeing and fully-comprehending disciple, Bartimaeus immediately follows Jesus on the way, the way that entails suffering for others, the way that is cross-oriented and cross-purposed. In Mark’s Gospel Bartimaeus bears a unique witness to the transforming power of faith. With Bartimaeus, we learn how to walk by faith and not by sight.

I see so many similarities between the story of Bartimaeus and the story of Helen Keller, born in Tuscumbia, Alabama in 1880. She too transcended her disabilities, she too receives a vocation in the midst of her brokenness, she too embraced a cross-oriented life of service to others. She walked by faith and not by sight. Although blind and deaf, she was able to touch the lives of countless people all over the world, casting aside the world of restrictions found in her day.

Most people are familiar with her story from the play, The Miracle of Worker, first released in 1957. Helen, born a normal child, was left blind and deaf from a debilitating fever at 19 months. Pitied and doted on by her parents, Helen becomes undisciplined, and by the age of six grows into a wild, angry, tantrum-throwing child. As a last resort, her parents contact Perkins Institute for the Blind in Boston. Annie Sullivan, a woman with poor eyesight herself, is sent to teach Helen. Sullivan began by teaching Helen that objects have names and that she can use her fingers to spell them. The battle of wills and actual physical fights between the strong-headed Helen and the equally stubborn Sullivan are unforgettably captured in the play. 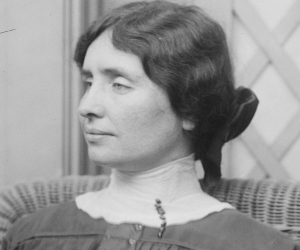 In one of the most beloved scenes in all American theater, the scene at the water pump, a miraculous connection inside Helen breaks through and takes effect. Like Bartimaeus, Helen’s ability to connect her inner world with the larger world gave new birth to infinite possibilities in one heart-tugging, grace-filled moment. (To view scene click here.)

Bartimaeus and Helen Keller offer all of us the hope of transformation, an authentic discipleship, a call within our brokenness. By looking afresh through their eyes of faith, we re-discover our true vocation and purpose, the call to follow Jesus on the way.

Images: An oil painting by Eustache Le Sueur with the name “Jesus Heals the Blind Man”
Photo of Helen Keller from the Library of Congress