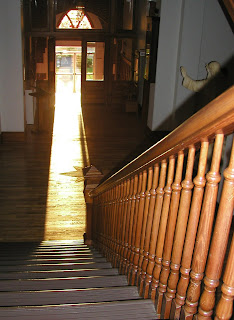 A time-honored tradition here at Sacred Heart is ‘meeting at the star,’ the star being a wooden inlay right in the center of Ottilia Hall’s first floor. The original star was in tile, and for generations served as a central meeting spot, as in “I’ll meet you at the star.” The star’s importance as an internal landmark is such that when the tile was replaced with hardwood some years back, the star was retained, this time in inlaid wood. It remains an important landmark.

Although the liturgical celebration of Epiphany is now behind us, perhaps the star can remain a landmark on our interior horizon, a reminder that we are continually called to seek Christ, to come into His presence and give homage, and offer to Him 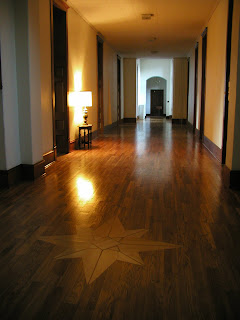 all that we have and are. We are daily called to journey to ‘meet Him at the star.’

And behold, the star that they had seen at its rising preceded them, until it came and stopped over the place where the child was. They were overjoyed at seeing the star, and on entering the house they saw the child with Mary his mother. The prostrated themselves and did him homage. Then they opened their treasures and offered him gifts of gold, frankincense, and myrrh. Mt. 9-11