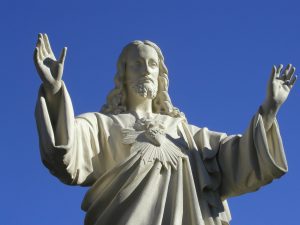 “Your way of acting should be different from the world’s way; prefer nothing to the love of Christ.” RB 4:20-21

The first time I visited Sacred Heart Monastery I was with good friends, who had surrounded me with their love and concern and thought a trip to such a place would be good for me. I was grieving after losing my mother suddenly and my father would pass away soon after.

The following year I returned on my own, uncertain if I would even be able to make the three-and-a-half-hour drive by myself. Each mile became a trial forcing me to face my fears and to come to terms with grief and loss. Yet somehow, I wanted to find my way to Sacred Heart, as if I would find whatever it was I needed there.

As I slowed the car to pull into the long drive that led to the chapel and retreat center, a calmness embraced me. Though I was exhausted from the drive and my churning emotions, I looked up to see a larger-than-life statue of Jesus, arms extended in a welcoming gesture beckoning me forward. A small voice inside of me said, “Welcome home.”

What I learned in subsequent visits to the monastery became a guidebook of sorts as I became increasingly interested in the way of monastic prayer and life, and especially the Rule of Benedict. I often recalled the images of the sisters as they went about their lives in community, coming and going, just as we do in many ways in our own homes, yet always returning together to the chapel for prayer. I saw the commitment to community that reminded me of the early church and how members held one another in esteem, despite the challenges that come with sharing daily life. I realized this way of being in the world yet not of it had been maintained throughout the centuries, and it set an example that encouraged me to learn more. Stability, conversion, and obedience took on new meaning as I explored the ways these attributes of the Rule applied to my own circumstances, within my marriage, my faith community, and the workplace.

Losing both of my parents within a brief period had left me feeling alone in the world in a way, even though I have a loving husband, family, and friends. I longed for a sense of belonging that would attest to my being a part of the greater whole of the Christian life. I was yearning for something timeless and assuring in its ability to traverse the ages untouched by trends and the comings and goings of a restless, aimless human progression to the future. Within the Benedictine way of life, the centuries old Rule of Benedict, I heard a call that silenced my apprehensions about how unsuitable I was for such a life. I learned how the Rule was for beginners, for those who would fall down and yet get up, again and again. The Rule became a companion to me and enabled me to see a way of walking alongside Jesus, immersed in his life, along with others who felt led to do the same.

I come to Sacred Heart Monastery for many reasons, not least of which is to feel as if I am drawing nearer to the heart of Jesus and to be with others who long for this sense of connection too. Being in community with the sisters and oblates is a homecoming that reminds me how the body of Christ is woven into the world through prayer and commitment to caring for and loving one another. Our homes and communities become an extension of those graces found at the monastery.

I always leave feeling at home in the world, though not of it, with a Rule and a community to sustain me that is generous and forgiving of my fumbling intentions, yet capable of keeping me on course.