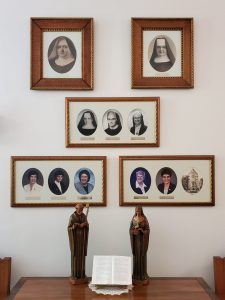 One of the many blessings I experience in writing these blogs is that they are a wonderful opportunity to thoughtfully peel back the layers of who we are as monastic women and followers of Benedict and Scholastica in today’s world. During this glorious Easter Season, we, as a monastic community are moving through one of the most sacred discernments we are faced with as a group, the discernment of leadership for our Community.

By the time this blog is published, we will have selected the Sister who will serve as the 11th Prioress of our Community, continuing an unbroken lineage since our founding in 1902.
As in all the aspects of our lives together, we turn to the Rule of St. Benedict to give us guidance and insight for this most sacred task of discerning new leadership. The Rule begins with the admonition, “Listen, my child …with the ear of your heart.” Benedict’s directive to listen goes much deeper than the mere act of hearing with one’s bodily ears. He tells us to listen with the heart, with the core of our very being.

Benedict’s message is underscored with a quote from Psalm 95, “If you hear God’s voice today, do not harden your heart.” In discernment, our hearts must be pliable, capable of being formed by the Word of God. For Benedict, careful listening is the prelude to wise discernment. Learning to listen well is a first step on the path toward transformation in the monastic life. Attentive listening also is the first and foremost quality to be found in the one who is called forth for leadership according to St. Benedict.

Leadership in the Rule of St. Benedict is to be understood within the framework of two essential truths. The first is that Christ is the ultimate authority figure for the monastic community. The second is that the Prioress/Abbot holds the place of Christ in a representative way for the community. The leader is chosen by the perpetually professed members of the community and receives what Benedictines call “the grace of office.” Benedictines recognize Christ as the one who acts in the person who selected as Prioress/Abbot. It is understood that both the leader and the community are subject to the authority of the Rule. Furthermore, Benedict balances the unique role of authority in the leader with the community’s responsibilities for speaking and listening on issues of importance (RB 3).

St. Benedict writes about leadership/authority three times in the Rule. In Chapter 2 he discusses the qualities of the Prioress/Abbot. In Chapter 3 he addresses the balance between the authority of the Prioress and the responsibilities of individual members. In Chapter 64 he explains the manner in which the election of a Prioress/Abbot takes place. These three chapters are kept in the forefront of our minds throughout the discernment and election process.

Benedict understands that the purpose of authority is to “author life.” Authority is vested in the Prioress, who is elected by the entire community. She exercises that authority for the benefit of the whole community as well as for the good of the individual members. For this reason, the two goods must be balanced. Achieving that balance necessarily calls for open dialogue, prayerful listening, and Spirit-filled discernment.

The Benedictine approach to making decisions sees each member of the group as having a piece of the wisdom needed for the Community to fulfill its purpose of seeking God and serving God’s people. It requires that all voices be heard. Structures, such as monastic chapter and the monastic council, facilitate the process in which members offer their personal insights and listen to the insights of one another. Varying opinions and perspectives enrich the process of seeking God together as a cohesive group. The Prioress facilitates this communal discernment and strives to bring the group to a unified understanding of matters under discussion. The Prioress does not seek to discover the will of the majority but rather seeks to determine God’s will for the whole community.

The Prioress’s role, however, goes beyond mere facilitation. She has genuine authority. After having listened carefully to her Sisters, she is ultimately responsible for setting the direction of the community’s life and activity. As the Rule notes, she ponders the advice of all and follows what she judges to be the wiser course. (3.5) Since monastic authority is to be exercised to promote life, the Prioress is accountable to all whose lives are touched by her decisions. This is an awesome responsibility not to be taken lightly.

According to our former Abbot Primate, Noktor Wolf, “Benedict considered authority only justifiable and good when official power was paired with concern for each individual, when it was combined with respect for individuality, different abilities, and particular personal needs. When Benedict thus endows the Prioress/Abbot with far-reaching powers, this is not only because someone has to have the final say but because he understands authority as an instance that helps, supports, encourages, and exhorts, and is constantly mindful of the progress and welfare of those who are subject to it. The purpose of real authority is therefore always to help people to become more independent and discover what lies within their capabilities: in other words, help them to become free.” Abbot Primate Notker Wolf with Leo G. Linder (translated by Gerlinde Büchinger-Schmid, edited by Sue Bollans www.litpress.org.)

The women who have served as Prioresses over the years have indeed followed in the footsteps of Christ in laying their very lives down for the welfare of our Community. So, as we welcome the Prioress that the Holy Spirit has chosen for us for the next six years, we invite you to join us in prayer for this valiant woman who will lead us into our future together.