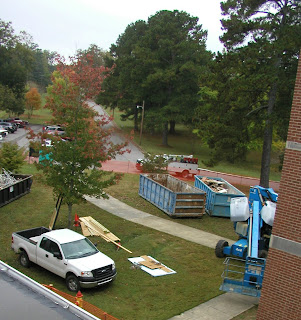 The rhythm of renovation has been filling the air with an insistent, unrelenting, percussive intensity that somehow becomes strangely soothing after a while. When the noise suddenly stopped one day this week, two of us looked at each other with the same thought: “What’s wrong?” Nothing was wrong, except the sudden absence of the now-familiar, oddly-comforting soundtrack of beeps and thumps and whirrs.

Over three short weeks the persistent mechanical cadence has become nearly as steady as the rhythm of prayer, a rhythm to which we remain faithful through the twists and turns of construction. Despite altered routes, a half-lit chapel (temporary, thank goodness!), constant temptation to look out the window to see what is happening, and all the various inconveniences of living in a construction zone, our rhythm of prayer remains as steady as the rising and setting of the sun. And as steady as it has been for generations here on this good ground and in these sturdy buildings. Earlier today, I scanned an old post card, probably from the 1930’s or early 1940’s, that depicted Ottilia Hall, Joseph Hall, and the Chapel. As the scanned image displayed on the screen, I noticed that the picture portrayed a yellowish/orange morning sky over the eastern trees, the same shade that captured my attention this morning as I stepped from my Joseph Hall room and gazed out the eastward facing window at the end of the hall.

Here at the monastery, our connection with the ceaseless rhythm of prayer is ever present. Roused by the same rising sun, gazing at the same eastern sky, we get up each morning and head to the chapel, just as generations of Sisters have done. The rhythmic sounds of renovation are mere backdrop to a stronger, deeper rhythm – the timeless monastic cadence of prayer and work, a rhythm in which we are not missing a beat.

Postscript: A local TV news story about the renovation project can be viewed here. Click on video at right (you’ll need to wait through a brief commercial).