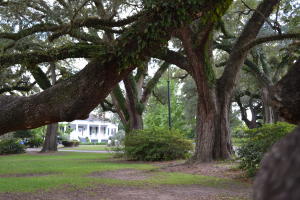 I am renewed by long hikes through the woods or even brief walks around the block. Weather permitting, I’m out every morning for a 30-45-minute walk in the neighborhood, enjoying the sights, sounds and scents of the changing seasons. Wherever I am walking, though, I’m captivated by the very old trees. Sometimes they are gnarled with age and missing bits of themselves. Maybe that’s from a storm or simply the ravages of old age. They seem to me like wizened, old grandmothers. If they could speak, can you imagine the stories they could tell of life in the old forest here before all these houses and manicured lawns?

Thirty years of research by forest ecologists proved that old people and old trees have something in common. Both have the ability to support the younger generations. Old trees use the underground “wood-wide-web” to communicate water and nutrients to vulnerable seedlings growing beneath their understory. Deep rooted old trees access water to share with shallow rooted younger ones. A marvelous fungal network connects trees and other surrounding plants, providing a complex network of mutual support and defense. Who would guess all this generativity is going on unseen beneath our feet?!

My inspiration for this blog about old people and old trees is the recently published book, Finding the Mother Tree: Discovering the Wisdom of the Forest by Suzanne Simard. Her work influenced the Tree of Souls from the movie Avatar by filmmaker James Cameron. In Dr. Simard’s words, “Trees are not simply the source of timber or pulp but are a complicated, interdependent circle of life…with communal lives not that different from our own.”

In ancient Israel, elders were venerated and granted status. They played a key role in passing along traditions, wisdom and insight: “….ask your father, and he will inform you; your elders, and they will tell you.” (Deuteronomy 32:7) Though the later Greek world contributed much to civilization, within it were seeds of ageism. Greeks focused on youthful heroism, physical perfection and beauty. They looked upon aging as a catastrophe, a form of divine punishment. Other ancient cultures, however, modeled in one form or another the commandment we follow, “Honor your father and your mother.” (Deuteronomy 5:16)

Parents, grandparents, aunts, uncles, and all “elders” have the potential of being the wisdom keepers and guides for a community. The Directory for Catechesis quotes from Pope
Francis’ General Audience of March 4, 2015:
Elderly persons are a patrimony of memory, and often keepers of the values of a society. Social and political decisions that do not recognize their dignity as persons are aimed against society itself. “The Church cannot and does not want to conform to a mentality of impatience, and much less of indifference and contempt, toward old age.” Instead, she looks at the elderly as a gift from God, a resource for the community, and considers their pastoral care an important task.

Pondering this reminded me of the book, From Age-ing to Sage-ing: A Profound New Vision of Growing Older (1995). Authors, Zalman Schachter-Shalomi and Ronald S. Miller, explore aspects of healthy aging, inner growth, and renewed purpose. In a culture that has increasingly segregated the elderly from the younger generations and discounted the value of the last chapters of life, this is an important read. Describing how this change took root in the industrial age of 19th century America, the authors explain:
Many immigrants came to America to escape from authoritarian Old World traditions, including the tyranny of kings and monarchies. But in their revolutionary zeal to overthrow authority, they dealt the aged a grievous blow. Identifying old people with the “old ways” that were overturned by the American and French revolutions, they vowed never again to submit to such tyranny. Power passed from the fathers to the democratic sons, who valued the new and technological, rather than the old and traditional progress but has left elders without meaningful roles.

Unpacking those meaningful roles is another important book for its perspective on aging. In The Gift of Years: Growing Older Gracefully, Benedictine Sister Joan Chittister writes (2008), “Wisdom is not the quality of being wedded to the past. Wisdom is the capacity to be devoted to its ideals. As the Japanese poet Basho wrote, “I do not seek to follow in the footsteps of those of old. I seek only what they sought.”

A great treasure of Benedictine monastic living, I’ve found, is the interplay and interdependence of many generations living together. Everyone has a valued place, voice and purpose within the community. Our older Sisters provide a wealth of lived wisdom, ideals, reflective understanding and insight. I learn much from watching how they live. From one generation to the next, we pass along the stories and good zeal of those who came before us. All this nourishes our spiritual journey and human development as individuals and as a monastic community.

To be frank and honest, in no way does length of years guarantee wisdom or perfection! Sometimes we have settled for attitudes and habits that are unhealthy. We coast along, avoiding the kind of deep reflection that could lead to wisdom and change. Saint Benedict recognized this and warned to “do as they say, not as they do.” To help us stay on track, though, he also urged that we “keep death before us daily.” Perhaps this is an easier practice for some of us when we are actually in the later years of life! Retired dancer and choreographer Anna Halprin spoke of the possibility of deeper reflection and insight as we approach the end of life as “enlightenment at gunpoint.”

Dr. Simard writes, “The forest is wired for wisdom, sentience, and healing. This is not a book about how we can save the trees. This is a book about how the trees might save us.” Whether it’s old trees or old people, this is something important to explore. The older generation is meant to play an important role in our salvation.