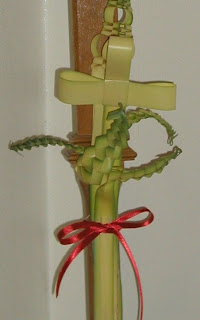 The reed folded sweetly around my fingers, as sweetly as the voice of Sister Mary Jude as she said “That’s right, Sister. That’s the way. You’ve got it.”

She was teaching me how to plait palm, a traditional skill to be handed on to me, and to others. I was startled at the suppleness of the palm once the hard edge had been peeled and discarded and the slender reed broken nearly in half. Now it was to be threaded and woven into something entirely new. In my uncertain hands, its disposition was relaxed, its mood pliable. I folded, tucked, and wrapped, folded, tucked and wrapped, my fingers slowly acclimating themselves to the palm, even as the palm adjusted itself to my fingers.

“You have to keep it moist and fresh,” she said. “If you let it dry out, it will break.”

We were plaiting palm for tomorrow’s Passion Sunday procession – decorative palm for the cross, the celebrant, and our prioress. We’ve been making other preparations, too. Sister Mary Adrian and Sister Kathleen arranged fans of palm for the altar. Sister Therese tied ribbons. Sister Kathleen Christa prepared for Vigil. The incense is ready. The wood of the processional cross has been freshly oiled. Musicians and cantors have rehearsed. Sacristans are prepared. And meanwhile, I keep thinking about the pliant yielding of the palm.

I keep thinking, too, about those who, over 2000 years ago, made preparations for Jesus’ entrance into Jerusalem. Those who untied the donkey, spread their cloaks, cut down branches, cried “Hosanna…” And I think about our Lord Jesus as he entered the city.

“Pull it tightly. And you’ve got to hold it firmly. Hold it tight and don’t let go.”

I folded, tucked, and wrapped, folded, tucked, and wrapped, holding tightly and not letting go, committed to doing my bit of preparation to commemorate Jesus’ journey. It was heart preparation, too, praying that my heart could be as supple as fresh palm, hard edges peeled and discarded, pliant in the hands of God, yet as firm as Jesus as he entered Jerusalem, holding tightly to his destiny, eyes set firmly on the cross – both pliantly yielding, and not letting go.