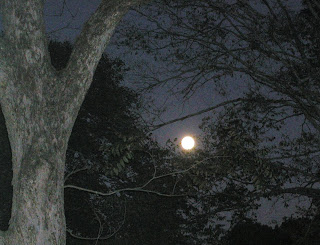 Last week, Sr. Benita took a bus trip to Kentucky to visit a couple of Sisters at St. Walburg Monastery in Covington. She’s known these Sisters for years but hadn’t seen them in a good while so she talked with our Prioress, made some arrangements, and off she went.  On her return trip, the bus schedules got tangled up, her arrival was several hours later than planned, and Sr. Lynn Marie and I found ourselves taking an unexpected midnight trip to Huntsville to meet her in the wee hours of the morning.
During meals over the next day or two, various Sisters asked about our late night trip and I told them about downtown Huntsville at midnight, what the bus station was like, how many other people were there waiting, and so on.  At one point, while describing the plate glass windows of the bus station, I became aware of the rapt attention with which people were listening.  It was a far greater raptness than one would expect for such a mundane topic.
What could account for such high interest in such a lowly subject?  It’s not that the bus station was such an unusual place.  It’s not that downtown Huntsville at 12:30 in the morning had much of a story to tell.  And it’s not that I’m a great story teller who could pull even a sleepy bus station to vivid life.
As I watched the intensely interested faces I realized what accounted for their focused attention.  “They care,” I thought. They cared about Sr. Benita and her travels, and they cared about Sr. Lynn Marie and I and what we had experienced waiting in a parking lot at midnight. They cared, and they listened intently.
This kind of caring for one another is characteristic of monastic community, the kind of caring that makes even a quiet bus station and empty midnight streets come to vivid life. It’s the kind of caring in which a plate glass window at midnight can become a prism through which the love of Christ shines forth.  Let us be such windows for one another!
Postscript:  St. Walburg Monastery is one of the two communities from which we were founded in 1902.  We remain connected with them both at the Federation level (we both are members of Federation of St. Scholastica) and at the personal level with ties of friendship and concern for the other’s well-being.  Speaking of caring, when it became apparent that Sr. Benita’s departing bus was going to be signficantly late, one of the St. Walburg Sisters waited with her until her departure.  Thanks be to God for the gift of friendship and loving concern.