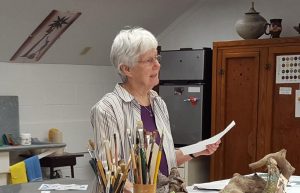 I walked into her room to find her easy chair set up for me with a small tray table in front of it, so I could take notes. She smiled warmly, asking if I had ever seen her room, then proceeded to show me around – from the hand-made window seat in front of the window, to a beautifully hand-crafted wooden table. Everything was aesthetically arranged. After we sat down, she offered refreshments.

I have long known that Sister Mary Adrian McLean has a gift for warm and joyful hospitality and artistically creative talent, but I was surprised that she would extend this level of gracious hospitality to me in response to this simple request for an interview. Once she sat down, the stories began spilling from her with many smiles.

She grew up in the country around Jasper, Alabama, in the 1930’s, the youngest of seven children. Northwest Alabama was mission territory and the Catholic population was sparse. Mass was offered at the church in town only once per month. Otherwise, her Catholic education came from the Trinitarian Sisters who came during the summers to teach the Catechism. She had a happy childhood.

Attending Sacred Heart Academy, she found that the other girls were joyful “and I thought the Sisters were amazing.” Their dedication was an inspiration which “became an invitation from God to me to serve Him as a Benedictine.” She had a longing for Scripture. It was almost as if she had a thirst to make up for the sparseness of her early Catholic education.

It was an early ministry experience of teaching two children with learning disabilities that ignited a passion to help children with special needs. No matter that she tried very hard with these first two students, she felt a failure. An opportunity for the Joseph P. Kennedy scholarship to attend George Peabody College in this area came across Education Director Sister Mary Lourdes’ desk. Knowing of Sister Mary Adrian’s interest, she encouraged her to apply.

Her application was successful, and after graduating, she began this new ministry at the Center for Developmental and Learning Disorders at the University of Alabama – Birmingham, where she constantly told the children, “You are important,” and to, “Keep trying, no matter what.” She knew the lesson was sinking in one day when she and the class were being observed through a one-way glass window. She led the class in singing a patriotic song, after which a student piped up, “Sister, you can’t sing worth a damn, but you sure do try hard!”

To this day, Sister Mary Adrian treasures a wooden cross that one of her students painstakingly worked on for an entire day. It hangs above her bed, and she hopes that it can be the cross that will adorn her casket after her death.

It soon became clear that for the administration, the school was there for the purpose of medical research and not for what was essential for her: respect for the dignity and importance of each child, so she carried this belief with her to West Elementary School in Cullman where she found that these special children needed to hear this more than most, because they often heard the opposite. For example, a father told her that his son was, “not worth a damn. He can’t learn a thing.” In spite of such challenges, these were “happy, happy years” for her. “I probably learned far more from them than they learned from me.”

When the community had a need for assistance with a new ministry to elders – Benedictine Manor – Sister Mary Adrian brought her firm belief in the importance of each individual to her new position. Her Mardi Gras parades and horse races on Derby Day became renowned in our Community. For the horse races, she made a track as big as the pool table and used horses meant for Christmas tree decorations. She made sure there was a horse for each, named for each and every resident, because they were “important.”

Up to this point, Sister Mary Adrian’s God-given creative gifts were all natural and untrained, but a sabbatical experience at Blessing Place in Louisiana, brought an opportunity for classes in a variety of artistic mediums. It was here that she discovered that working with clay provided a new outlet for her ability.

Back at home, she opened a studio named, Synchronicities, taken from the thought of Carl Jung, that an external energy meets the human person and creates the phenomenon of a synchronicity. Others might call it a coincidence. For her, that external energy is God’s energy, and a synchronicity is a reminder of God’s presence in our lives. Her studio, where she both creates original hand-built clay pieces and teaches others, is “a sanctuary between God and me.”

At the close of our conversation, she said, “All my life I have run. People often told me to slow down, but I find my inspiration in the words of St. Benedict’s Prologue, ‘Run while you have the light of life,’” and I’m still running toward God.