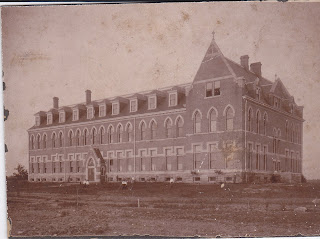 When I read the news that the 1940 Census has been made public after the obligatory 72-year wait, well, I just had to look up Sacred Heart Monastery. Even though all the census details – and far more, besides – are tidily stored in our monastery archives, an outside view of names, ages, and categories promised to be too interesting to pass up.

I found the website, located our Enumeration District, viewed the census schedule, and there on my screen appeared the census enumerator’s handwritten list: Mother Annunciata, Sister Perpetua, Sister Gertrude, Sister Beatrice, Sister Aloysia, Sister Agatha…and on and on…

All day long I’ve been unable to shake these names out of my head – these Sisters who dwelt in rooms that we who are here now have dwelt in and will dwell in again, rooms that are now being renovated, re-tiled, re-painted, renewed after having been lovingly cared for by these and so many other Sisters. The renovation of our monastery is an awesome responsibility, made even more so by the knowledge of how carefully the Sisters who have gone before us have cared for this house, this home…God’s house, God’s home.

The names of these Sisters are familiar to me. They are part of our community history. I’ve heard stories about each of them. But seeing them listed in this particular context was somehow poignant. There was the impersonal context of the census – just a list of names and a few biographical details. But I know them as so much more than names on a list. I was reminded of a phrase from one of Mother Ottilia’s letters in which she referenced “all the dear Sisters.” They are not just names on a government form. They are dear Sisters, all. 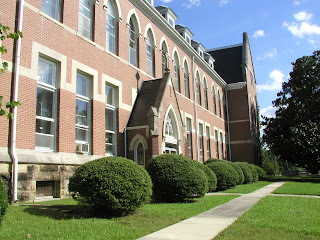 Of the various 1940 census questions, my favorite is the one that asked, “In what place did this person live on April 1, 1935?” In other words, did they live in the same location as five years previously? For every Sister listed, the answer was identical: “Same house.” On row after row after row, for Sister after Sister, this repeated answer got to the core of our monastic vow of stability. We stay put. The Sisters were in the “same house” that they had been in five years previously – and surely five years hence.

Every ten years, census takers come. In the intervening years, some Sisters will have died, and new ones will have entered. But no matter. Whichever ones of us are here, we still live in the same house, still pray in the same chapel, still sit in the same choir stalls, still live by the same Benedictine Rule. The census list will read Sister…Sister…Sister… Our place of residence will be Same house…same house…same house. Because we are Benedictine and we stay put – with all of our dear Sisters, in God’s house.

Postscript: Our monastic vow of stability is actually stability to the community, to the particular group of monastics, rather than to a specific location. But the stable commitment of a community to a place over a sustained period of time is characteristic of Benedictines. It imbues our life with a richness and depth that is hard to find in the constant motion of our transient culture.