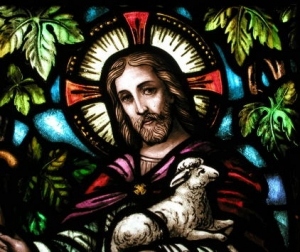 A casual visitor to our monastery chapel might not notice the “Good Shepherd” stained glass window among the side aisle windows. It always has been one of my favorites, depicting Jesus as deeply compassionate, always willing to take the lost sheep upon his shoulders, always ready to lay down his life for his flock.

St. Benedict also favored this image of Christ, writing in chapter 27 of the Holy Rule that the Abbot “must imitate the loving example of the Good Shepherd who left the ninety-nine sheep in the mountains and went in search of the one sheep that had strayed, so great was his compassion for its weakness that he mercifully placed it on his sacred shoulders and so carried it back to the flock (Luke 15:5).” Most important for any monastery, Benedict implies, is a deep well of compassion.

This past Sunday the universal Church celebrated the 57th annual World Day of Prayer for Vocations. Vatican II was still in session when Pope Paul VI first announced in 1963 that “Good Shepherd Sunday,” the fourth Sunday of Easter each year, was to be designated as World Day of Prayer for Vocations to the priesthood and consecrated life. Since that time, Christian communities all over the world have gathered each year on the Fourth Sunday of Easter, and after focusing on the image of Christ as Good Shepherd, have united in prayer to ask God to send workers into the harvest.

I feel certain that the fervent prayers of so many people offered in the years before my decision to enter religious life had a profound impact on me. I believe our continued prayer for vocations will have a similar impact on a new generation of seekers as they discern their call to embrace the religious and ordained life as the 21st century evolves.

In last Sunday’s Gospel we are told “the sheep hear his voice, as the shepherd calls his own sheep by name and leads them out…He walks ahead of them, and the sheep follow him, because they recognize his voice” (John 10: 3-4).

How does the Shepherd know his flock? With a similar intimacy as members of a monastic community.  The members know one another not only by name but also through the lens of daily community living–a characteristic gait, particular mannerisms, tone of voice, and expressions of goodness. One has a the slight limp, another tends to wander away from others,  and yet another appears to have a tough exterior. The Good Shepherd has a special name for each sheep because that name reflects a unique personality that is known and loved intimately, both in her weakness and sinfulness and in her beauty and full potential. The name the Shepherd gives was established for us before we were formed in our mother’s womb. We are born with the seeds of our vocations already planted deeply within.

How do the sheep come to know and recognize the voice of the Shepherd? His is the voice that calls us daily to become all that we can be, to flourish within the beloved flock he was chosen, to school ourselves in the service of others, to be his very Body in the world. His is the voice that calls us forth to holiness, who believes in our abilities, who equips us to be courageous and generous, who rescues us when life inevitably crushes or disillusions us. His is the voice that leads us from dark valleys to verdant pastures where he sets a eucharistic table before us. It is he who came that we “might have life and have it more abundantly” (John 10:10).

Listening daily with the “ear of the heart” for the voice of the Good Shepherd, and responding with a wholesome trust is how vocations are nurtured and how they mature. We are reminded as a global Christian community during this time after Easter that through our baptism and confirmation we are called to holiness, responding to the voice of Jesus in our now COVID-filled world with compassion, generosity, and humility. With this image of Christ as the Good Shepherd before us, let us now take those weary of sickness, grief, and sheltering-in-place on our shoulders, and be ready to lay down our lives for the most vulnerable. Let us never stop praying for vocations to serve a world ever more desperately in need of Christ’s love.