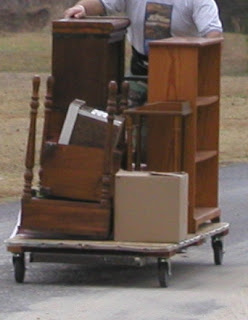 The folks at the NYSE and other giant stock exchanges around the world have nothing on the Sacred Heart Monastery Stock Exchange in terms the dynamic material economy that gets stably expressed in our little SHMSE. We may be small in number and materially modest, but we could corner the market on the stable exchange of goods  – although there are occasional situations that require subtlety, nuanced timing, complex trading…and yes, wisdom.

Yes, I know we’re more associated with prayer than with material goods, and rightly so. But we pray and live within an environment of tables and chairs and clothing and computers and jump drives and lamps and books and picture frames on and on and on. We can go long stretches with our stocks of furniture and other items remaining relatively stable, with goods staying put where they have stayed put for almost forever. But occasionally the ante gets upped and along comes a run on stocks.

St. Benedict calls us to regard all goods of the monastery as if they were vessels of the altar, and so we are careful with our material goods. So careful that under normal market conditions our main stock exchange consists of what we call the “Give-Away Table” (which is not really a table, but a chair, which replaced an actual table, which replaced a banister). The Give-away Table is the spot on which Sisters place items that they no longer need but that someone else in the monastery could perhaps use. It is governed by what you might call a free trade agreement. You might find a Benedictine medal or a bookmark or a calendar or an old watch or an article of clothing or a pair of shoes. Or you might leave for the taking a holy card or a sweater or a yard stick…

It is mostly a very stable market with very little volatility. Things come and things go. You suddenly see Sister A wearing a sweater that used to be worn by Sister B. And so on. When stocks get too high, Sr. Bernadette packs it all up and takes what can be potentially used by others to the local thrift store.

But every once in a blue moon there is a stock market crash. A real market panic. It happened to me this weekend (during which there was, of course, an actual blue moon). It happened like this…

Much earlier in the summer a black jacket had been left in an odd place. It stayed. And stayed. Some of us wondered. And discussed. And asked around about the mysterious jacket, hoping to discover where it belonged. We were true market speculators. After some weeks we were still speculating. I took a risk and placed it on the Give-away Table (Chair), hoping that the proper Sister would find it. The next morning at Lauds, a Sister was wearing it. I was pleased. All was well.

That is, until this weekend when a note was posted asking if anyone had seen a black jacket. I panicked. I went to the Sister who posted the note and confessed my error. I went to another Sister to see where the jacket might be. She no longer had it. The jacket was nowhere to be found.

After a ripple effect of consultations and searches and rapid heart beats and prayers, the jacket was finally located – in a sack of clothing that was two hours away from being taken to the thrift store.

I was pretty much a mess of regret and contrition as I rode the waves of a suddenly volatile market. But this is where lessons are learned. And hopefully wisdom, too, as I learn to relate to my Sisters with love, and to the goods of the monastery with both reverence and restraint.

Postscript: Much of the moving of these past weeks is the result of ministry reassignments following the election and installation of Sister Tonette Sperando as our new Prioress. Some reassignments are common with a shift in leadership.