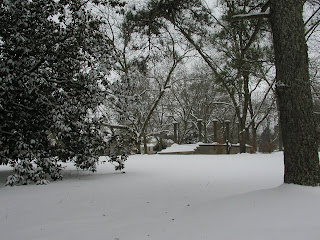 Here’s how the shoveling of snow typically goes here in the sunny South: First, you make a cup of hot chocolate. Then, you find a cozy chair. Finally, you wait in climate-controlled comfort as morning sunshine melts the half inch or so of snow that fell during the night. It’s all a fairly painless endeavor, no heavy lifting required, and the snow disappears as if by magic.

Imagine my surprise, then, when Sunday evening’s snow didn’t disappear on Monday morning. Sustained low temperatures, cloudy skies, sporadic sleet, and a several-inch layer of snow meant that melting was in some far-distant future. On Monday, Sr. Bernadette and I took a hoe and a broom and cleared one short path along an oft-used outdoor passageway. But by Tuesday morning it was clear that actual shoveling was required. Sr. Therese went out to the barn, located our one and only snow shovel, and spent the morning clearing sidewalks. After lunch, I took over, shoveling snow for the first time in my life.

I learned a few things about snow shoveling yesterday, mainly that snow weighs a lot more than it looks, that it should be pushed rather than lifted and tossed, and that ice compressed by tire tracks is more easily loosened with the grain instead of against it. I also learned there is no magic involved. It is hard work. And cold. 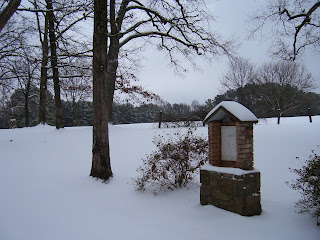 In Monday evening’s post I wrote blissfully about the beauty of the snowy pasture in the twilight. But even as I stood on the crest of the hill Monday evening, snuggled deeply into my coat, hat and gloves, I was thinking of those for whom the snow is a source of suffering, not joy. Then on Tuesday, the simultaneous presence of both beauty and suffering became not just an abstraction, but a visceral reality as I shoveled heavy, ice-encrusted snow in the deepening afternoon cold on grounds that nevertheless still bore the weathered beauty of windswept porcelain.

A few days ago, I heard a radio program in which a photographer was interviewed. In describing a collection of photographs, the photographer used the phrase “terribly beautiful.” While she used the phrase to indicate immense beauty, the phrase struck me as conveying well the reality that beauty often contains some measure of suffering, or is in some way “terrible.” At the time, I reflected on the phrase in terms of the Paschal Mystery, of death which leads to life, of a seed which must be buried and broken in order for new life to emerge, and of the juxtaposition of beauty and suffering in the natural world. 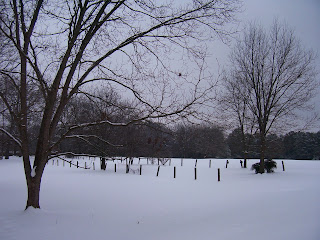 As I scraped and shoveled snow yesterday in the cold, cloudy South, a late afternoon burst of sunlight lit up the shining whitescape around me. The phrase returned to mind. I was both happy and miserable. The afternoon shone, and was clouded. It was grey, and it sparkled. It was “terribly beautiful.”

The world is full of beauty, and there are times we can enjoy it from the comfort of a cozy chair with a warm drink in hand. But often with beauty comes hard work, or pain, or suffering of some sort. And sometimes what is beautiful for one is a source of suffering for another.

Beauty does not come and go like magic, but is a gift of God to be received with gratitude, trust, and sometimes even endurance. And occasionally some heavy lifting, even here in the warm, sunny South. 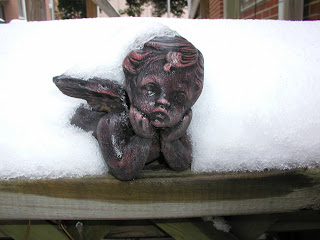 Postscript: Our prayers during these winter days have been full of remembrances of and petitions for those suffering from the cold, especially those who lack adequate shelter. Let us together keep in prayer those who suffer.