Yesterday when I arrived for Vespers I found in my choir stall a sheaf of blank music composition paper marked with the name of Sister Anastasia. I’m not sure who put it there, but someone must have come across it and decided I was the likeliest one to use it. As soon as I saw the name on the folio, I felt humbled and happy to be the inheritor of even a minuscule part of Sister Anastasia’s musical legacy.

Sister Anastasia has been deceased for many years and I never knew her, but I’ve heard story upon story of her musical talents and of “Sister Anastasia’s orchestra.” For years, she was the heart and soul of the music program of our former academy and college – as musician, teacher, conductor, and composer.  She has bequeathed to us far more than manuscript paper.

From the earliest days of our community, music has held a privileged place in the life of our community, both academically and liturgically. When we operated an academy, instrumental instruction was required of all students. In our monastic prayer, liturgical music, including chant, has always been of the highest priority. 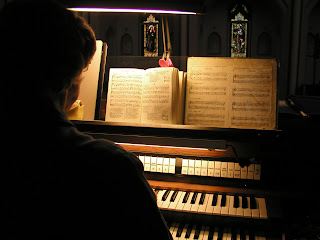 This rich musical heritage expresses itself today in many ways. We still chant the Divine Office using Psalm tones based on the ancient Gregorian modes. Sister Magdalena, our principal organist, routinely plays traditional music from worn books that are decades old, while constantly adding to her (and our) repertoire the work of current composers and hymn writers. The organ anchors all of our liturgies, but at times we  incorporate flute, hand bells, and/or guitar. We still use manuscript paper to sketch out, for instance, some hand bell parts, but are just as likely to use music notation software. We routinely use three different hymnals, with publication dates ranging from 1986 to 2009, while occasionally mixing in favorites from other, older sources. Just this morning, I walked into the chapel and Sr. Magdalena was reviewing some chant lines from a 1930’s hymnal (pictured above). 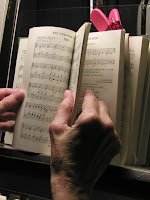 Suffice it to say, music remains central, and I would say indispensable, to the liturgical life of our community. We draw deeply from the well of our musical heritage, even as we constantly incorporate new compositions and texts. And while it is a delight to come across some old music or composition paper, especially when marked with the name of a revered elder, our real heritage is the love of music imparted to us by our forebears, and the deep impulse to join the eternal song of praise God.  A rich heritage indeed, passed along to us by Sisters Mary Grace, Cecilia, Imelda, Anastasia, Martha, Genevieve, and so many other Sister musicians who have gone before us.  With choirs of angels in heaven, and her musical heirs here at Sacred Heart, Sister Anastasia’s orchestra plays on…

Pictured above: Sister Magdalena reviewing chant modes from a 1930’s hymnal
And below: Sister Mary Vincent on organ (a student of Sister Anastasia’s, and violinist in her orchestra); Sister Sherrie on guitar; Sister Elisabeth on flute; Sisters Eileen and Therese on hand bells 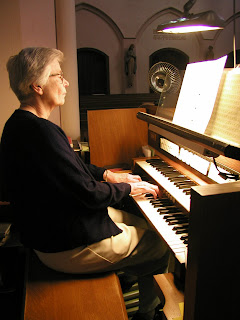 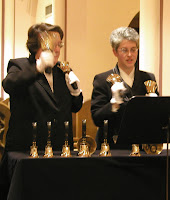