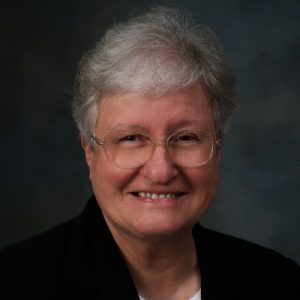 If you know our Sister Jane Bishop, you would know that when she sets her mind to accomplishing a project, she puts her whole mind and heart into it. She also has a knack for getting others involved in her endeavors. The roots of her generosity and pastoral hospitality run deep, and the fruits of her labors are abundant.

During a recent table conversation, Sister Jane shared some memories about her mother. She recalled walking with her mother in downtown Pensacola on shopping trips when she was a child. As they passed a blind man with a tin cup, her mother would always give Sister Jane some money to put into the man’s cup. Sister Jane would obediently do it, but then questioned to herself whether her family could afford to contribute the money when they frequently did not have enough money for tuition. Another memory Sister Jane shared was from when her aunt was very ill. Sister Jane’s mother asked her father buy bunk beds for her aunt’s two children so that they could move in and be taken care of in the Bishop home. Later, when Sister Jane’s older sister became widowed with three small children, they were invited to stay with the Bishop family until the mother could find a job and  eventually move out on her own.  Sister Jane believes that her mother’s witness of generosity and hospitality influenced the way in which she approached her varied ministries throughout her religious life.

Studying the various encyclicals on social justice and the teachings of St. Benedict in her early years as a religious, Sister Jane was inspired to pursue ministries in the areas of social concern. After eighteen years of teaching, she spent five years taking care of the Sisters in the monastery infirmary. She graciously accepted this assignment, believing that the experience of helping her father care for her mother, who died of cancer at the young age of forty-nine, would be helpful in the infirmary ministry.

Following the infirmary ministry, she knew she was called to pastoral care ministry and served for three years as Director of Pastoral Care at Holy Spirit Church in Huntsville, AL. She then received fifteen months of chaplaincy training in Clinical Pastoral Education (CPE) and was accepted as Co-Director of Pastoral Care at St. Francis Xavier Parish in Birmingham. She began to look for peace and justice programs available in the area. She found that there was a small functioning lay committee very much involved in a tutoring program in Gate City, a nearby economically depressed area in North Birmingham. In the 1980’s, she was asked to be the St. Francis Xavier Staff Liaison to the newly formed Renew Team. The Renew process was initiated by the Diocese of Birmingham to assist in the spiritual renewal of parishes through small group discussions of Catholic Social Teaching and Catholic Social Action. The basic theme of this renewal effort was a reminder that social concern and action was not an option but integral to living the fullness of the Catholic faith.

Sister Jane was then assigned to be the Council Liaison to three parish committees (Prayer Network, Social Concerns, and Special Events). She saw this position as an opportunity to expand parish involvement in outreach ministries.

After organizing the first meeting of twenty-five parish members, a decision was made to adopt a mission in Mexico, as well as the initiation of other local projects in the Birmingham area. After contacting the National Missions Board, Sister Jane was advised to contact the Diocese of Brownsville, Texas. She was informed that a Holy Cross sister from Indiana, Sister Barbara Koren, was involved in a Misión de Sanidad, a mission of health care of three Mexican ejidos (government land grants to the poor). After contacting Sister Barbara who was so pleased to accept support, the parish group began to organize their first trip to Mexico in May 1986. After eleven months of preparation and the parish’s blessing, Sister Jane and her group enthusiastically departed to the ejido of Cinco de Mayo located approximately twenty miles inside the United States Mexican border near Matamoros, Mexico. After Sister Jane introduced the group and addressed the ejido community gathered there, she asked “How may we be of help to you?” They responded that they would like a church in which to worship, as well as small construction projects, dentistry service, medications, books, and higher education opportunities. At the end of the initial meeting with the Mexican community, the eldest member stood up and said, “Thank you for coming. We thought God had forgotten us.” On hearing this statement of gratitude, Sister Jane knew that this ministerial journey would be one of the most memorable experiences of her Benedictine life.

Sister Jane and the St. Francis Xavier Parish did not forget! After their return home, fundraising and planning activities were in full swing. By 1990, the Church of the Holy Cross was a reality. Several parishioners built pews for the church and an audiovisual room. One of the parishioners provided dental care opportunities. Playground equipment was procured for the children. Education scholarships were awarded. This outreach, on behalf of the St. Francis Xavier parish community, continued for eleven years at which time Sister Barbara, the founder of the mission died of cancer.

Sister Jane, grateful for her various ministries, believes that nothing would have been accomplished without the guidance of the Holy Spirit, the support of her Benedictine community, and the generous support of the pastors, parish leadership, and volunteers.

Although Sister Jane is now “retired” and living at the monastery, she lives by the frequently heard motto, “Sisters don’t really retire.” Sister Jane has continued to be involved in teaching ESL (English as a Second Language) to Hispanic and Vietnamese Sisters, providing hospitality to guests, and assisting in various duties in the monastery.