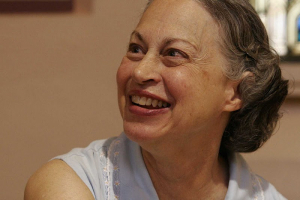 Sister Magdalena (Donna) Craig has a deep appreciation of beauty. Although she does not consider herself particularly creative, she creates beautiful liturgies by pulling together the creative works of others. Her love for liturgy has been a constant in her life. At her golden jubilee celebration, Sister Tonette observed that her love for good liturgy radiates from every pore of her being, and that over these many years she has inspired her Sisters and so many others by her planning of the liturgies and her beautiful organ and piano accompaniment for them.

Born in Louisville, Kentucky, Sister Magdalena describes a sense of comfort, warmth and security found in a close-knit extended family. One set of her grandparents lived on the next block. The others lived in walking distance from her home. All of her aunts and uncles were in Louisville. She was the oldest of all the grandchildren on both sides of the family then her sister joined her 14 months later. They were followed by many cousins later.

Music played an important role in the family. Her father had a beautiful tenor voice and sang in a barbershop quartet in Louisville.  Her paternal grandmother taught piano. Her Aunt Betty Jean was also a musician who played piano and organ. While growing up in Decatur, GA, the family purchased a piano when she was around eight years old. Both she and her sister began taking lessons.  Even though she always has enjoyed playing the piano, she didn’t like to perform.  When asked about playing for liturgies, she explained that she doesn’t experience this as a performance.

Reflecting on her religious vocation, Sister Magdalena recalls her first initial awareness of a vocation when she was still living in Louisville. She was attending second grade at a Catholic school and her teacher was a Sister, Sr. Beatrice Maria, a Sister of Charity of Nazareth, Kentucky. She must have felt a connection, because on a snowy November day, as she was passing the convent, she thought or said, “That’s where the Sisters live.”

It was during second grade that her family moved to Georgia and she attended St. Thomas More School.  By the time she was in the 8th grade, St. Pius X Catholic High School had been built, the first coed Catholic high school in the Atlanta area. She started there as a freshman and was in the first class that attended “Pi High” for all four years. At this time that she began to think seriously about religious life. Four different communities of Sisters taught in the school. 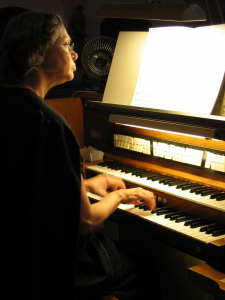 One of her classmates had attended John Carroll Catholic High School in Birmingham before moving to Atlanta. She wanted to travel to Sacred Heart Monastery in Cullman to visit the Sisters who had taught her at John Carroll. She invited Magdalena to go with her.  This was her first exposure to Benedictines and she felt drawn to this community.  The Sisters appeared to be down-to-earth, Southern, and friendly. They sang in Gregorian chant, and she was most impressed by the beauty of their liturgy.  Still discerning a call to religious life, she made a couple of other visits.

After high school graduation, she attended Sacred Heart College for one year. It was then that she requested entrance into the community.

As a novice in the community, she continued piano lessons with Sister Imelda McAninch. Following her first monastic profession, she was spent a year in further Benedictine studies at Mount St. Scholastica in Atchison, Kansas. While there, she took piano from Sister Joachim Holthaus, who usually taught only music majors. By luck or the grace of God, Sister Joachim kept Sister Magdalena as a pupil even though she was not a music major.  Until Sister Joachim’s death a few years ago, Sister Magdalena continued to visit her and to stay in touch all these years.

Following her time in Atchison, she began teaching and studying organ.  Sister Magdalena’s love of music flowed naturally into a love for the liturgy. After having taught for a number of years, she began studying for a Masters degree in Liturgical Studies at the Catholic University of America.  Initially she studied only during the summers, but she was offered a full scholarship to attend year-round and help with the liturgies on campus.

After finishing her degree, Sister Magdalena came back to Cullman to serve as the liturgist and organist.  This was a first for the community. She was very much involved in helping the Community to adapt to the changes in the liturgy that were initiated by the Second Vatican Council.

In the late 1980s, Sister Magdalena traveled to Italy for a Gregorian Chant study tour sponsored by Peter’s Way. A few years later, with a partial grant from the Grace Memorial Fund for Music in Liturgy, she was able to attend a week-long program in France, “Best of French Liturgical Music.” She heard lectures and demonstrations at various cathedrals and monasteries and had the opportunity to play the fine organs at Chartres Cathedral and at Saint Severin in Paris. Some residents of Cullman learned of her trip and asked if she would lead a trip to France for them. Eventually this led to more than 11 trips called “Benedictine Journeys.”  During her studies and travels, Sister Magdalena had developed a love of the French language. Later she was given the opportunity for a six-month sabbatical experience in Paris, studying French at the Sorbonne. She lived near Notre Dame Cathedral and was able to walk there to attend Mass and Office.

In what seems to be an ideal vocation story, Sister Magdalena honestly shares that she had personal struggles when she was in her 30’s and 40’s. With the support of the community she was able to work through them and grow into the person that she is today.

Sister Magdalena says that what nourishes her the most in her Benedictine vocation are the Liturgy of the Hours, the Community, living in community at the monastery, formation work, and meeting other Benedictines – both musicians and formators.  Her favorite form of relaxation is reading and takes every opportunity available to pick up a book or periodical. It is well known among her family, friends and community members that she takes reading material with her wherever she goes just in case an opportunity to read presents itself.

Here is a link to a brief YouTube video interview with Sister Magdalena done for A Nun’s Life Ministry: “How can praying the Psalms help us grow spiritually?”