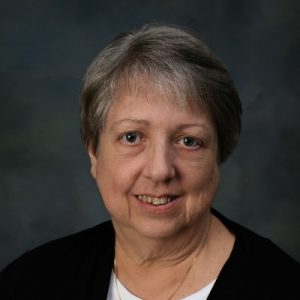 A brief quote from former U.N. Secretary General Dag Hammarskjold is most appropriate for this time of the year. “For all that has been, Thanks. To all that shall be, Yes.” Part of my own personal prayer involves praying individually for the Sisters in our community, giving thanks to God for what they have gifted me and our community with over the years. Looking into our shared future I can say a whole hearted “YES” to what we will encounter as we continue on our pathway to God together.

Blog writers have been encouraged periodically to highlight a particular Sister in our community. I would like to highlight and give thanks to God for is Sister Priscilla Cohen, OSB.

Sister Priscilla was born at Eglin AFB in Florida on July 2, 1948. She was the first born of nine children. Her parents were very loving and supportive of all nine of their children.
Her dad was active duty Air Force for most of their early years. Because of his service, the family moved quite frequently to many different areas of the country. They moved at least ten different times while the family continued to grow and the children were young. This very large and very close family lived at Air Force bases from the west coast to the east coast and many different places in between.

Even during the turmoil of frequent moves with the Air Force, Sister Priscilla’s parents made sure that the children received a strong foundation in their Catholic faith. They attended Mass weekly, even when it became necessary to go “in shifts” because of the number of children. Whenever possible they all attended Catholic School during their formative years.

Sister Priscilla shares that her family lived community values even as youngsters. All were expected to be cleaned up and ready for supper when it was served, every day of the week as well as on Sunday. She attended fifth to seventh grade at St. Patrick’s School in Kokomo, Indiana and was taught by the Sisters of St. Joseph. She remembers being attracted to the Sisters and would frequently knock on their door just to see if there was anything she could do for them.

Eventually the family settled in Pensacola, Florida where the family put down permanent roots.  Sister Priscilla was taught by Benedictines from Cullman at Catholic High in Pensacola. In her sophomore year she attended a Vocation Retreat led by Sister Genevieve and Sister Regina. “Their loving presence was awesome to me, and God called me to join them in monastic life,” she relates. After high school graduation in June of 1966, she travelled to Cullman in August to enter Sacred Heart Monastery on August 15, 1966, the Feast of the Assumption of Mary into Heaven. When she was ready to enter the Novitiate, she was given the name Sister Margaret Mary by Mother Mary Frances who was prioress at that time.

The following years were tumultuous years in the Church, religious life and society. For reasons too many to explain, after about five years in the monastery, Sister Priscilla and the five others in her group all decided to leave religious life.  Priscilla continued in nursing school at St. Vincent’s Hospital in Birmingham. After completing her RN, Priscilla continued nursing in Birmingham for five years before returning to Pensacola where she lived for 10 years.

During these years away from the community, Priscilla would visit three or four times each year and always kept in touch with members of the community. She remembers that as she would leave the monastery after her regular visits, she was often in tears as she drove away.

On August 15, 1987, Priscilla reentered Sacred Heart Monastery. She had come home. After a period of Formation, she renewed her vows and was given her baptismal name Sister Priscilla.

A Haiku written by Sister Priscilla explains her purpose in her life of ministry.

Open my eyes, Lord
to see you in everyone
for that is my call.

During the years spent working as a Registered Nurse at several hospitals as well as for the Health Department, Sister Priscilla also was involved occasionally with retreats given at our Retreat Center and spiritual journeying with individuals. Infirmarian, Subprioress and Secretary are just a few of the internal ministries she has served in at the monastery. Currently she is Community Secretary and serves on our Monastic Leadership Team. She continues to serve as Oblate Director for our community, which she has done for many years. Additionally, she is a member of the North American Association of Benedictine Oblate Directors (NAABOD). Sister Priscilla has served as Secretary of this organization in the past and is presently in her second term as President.

As the eldest of nine, Sister Priscilla always has played an important role in the lives of her siblings. Recently her family had a reunion here at Sacred Heart, and I asked her sister Lynn to share some thoughts about her older sister. This is what she had to say:

“If God allowed us to list the qualities we would like in a big sister, Priscilla, or Cilla as our family lovingly calls her, would meet all the qualifications!  We, as her siblings, are so thankful for the love she shows our children and grandchildren. Cilla always attended, and still does when available, birthday parties, graduations, showers and weddings. Our children’s best memories are Cilla taking them to the beach or out for ice cream or shopping. We loved that she had the patience to spend hours in the Dollar Tree, so we didn’t have to, as they chose just the right item!…Cilla has always shown the Benedictine practice of hospitality even before becoming a Sister. When Debbie and Lynn were in high school, she would allow them to come stay with her during the summer in Birmingham. That was a very big deal, living in an apartment with a pool!…We love our daily group text, sharing everyone’s Wordle results! The best thing about those texts is they usually lead to more texts about what is happening in our lives. Cilla’s calling to the religious life has given five generations of Mahers and Cohens the opportunity to experience a place like no other. Sacred Heart Monastery has been and is still so special to all of us that visit. We all, no matter what age, have a feeling of peace come over us once we step foot on the grounds. We will be forever thankful to God for giving us the gift of our big sister, Cilla.”

In closing I would like to echo the words of thanks that Lynn used. I will be forever thankful to God for giving us the gift of our Sister Priscilla.