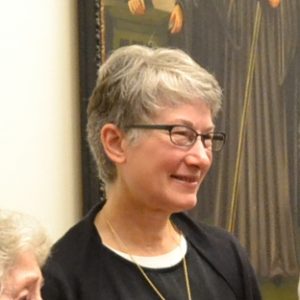 The Celtic Saint Aidan (died A.D. 651), whose name I took when I became a Novice, plays a significant role in my vocation story. Even now, the example of his life inspires me. It sets a “high bar” for which to stretch, as does The Rule of St. Benedict.

Both Saints Benedict and Aidan have accompanied me in these weeks of Lenten observance. Now in the few remaining days of Lent, when I’m acutely aware how I’ve fallen short of my better intentions, Aidan and Benedict encourage me forward. Just as both saints set a “high bar” for holiness by their example of Gospel living, their good zeal also includes compassion for human weakness.

Like Benedict, Aidan understood the human condition. This quality of Aidan’s was admired by Saint Bede who wrote a biography of this quiet monk who became a missionary, bishop, and abbot. In Bede’s stories, the first recorded words of Aidan are, “Brother, it seems to me that you were too severe on your ignorant hearers. Couldn’t you have been a bit gentler?”

As the story goes, the brother monk to whom Aidan spoke was Corman, who had just returned from a failed missionary journey. Both monks were members of Saint Columba’s famous Irish monastery on the small island of Iona, off the west coast of Scotland. Corman and a team of 12 monks had been sent to the Anglo-Saxon kingdom of Northumbria at the request of King Oswald. As a child, Oswald was taught the Christian faith when he was sent to Iona as a child to be educated. The people of Northumbria, however, were still pagan. Corman soon returned to Iona, angry and disappointed. He explained that the Northumbrians were stupid, pig-headed barbarians. “It just can’t be done,” he claimed. Aidan’s urging of a gentler approach was enough for the community to send him in the year 635 A.D., accompanied by a dozen fellow monks.

By the end of Aidan’s life, only 16 years later, much good had become of his gentle missionary efforts. He founded a monastic community on the small island of Lindisfarne, off the east coast of England. There, he started the first school in Northumbria to educate boys. If charitable people gave money to Aidan, he used it to buy children out of slavery, and brought them to his school. Most of the north and midlands of England were evangelized by Aidan and his monks. Though he had friendship with kings, Aidan’s great love was for the poor, caring for their physical and spiritual needs. Many of the churches of that era were founded by Aidan. He believed that women and girls should have the same educational opportunities. Because of this, he persuaded an English noblewoman called Hild, who wished to be a nun, to found religious houses where women could be nuns and girls could be educated. Bede records several miracles attributed to Aidan. Above all, Aidan was a man of prayer who meditated on the scriptures and took regular time for solitude and silence with God.

So how did Saint Aidan ever get woven into my vocation story? When I lived and worked in Scotland (1991-1993), I participated in a 10-day group retreat at the rebuilt Abbey of Iona from where Aidan had been sent as a missionary (though there was no stone structure in his day). On another occasion, I spent time on the island of Lindisfarne (“Holy Island”), the beautiful location of Aidan’s monastic community and church where he is buried. The experiences at both Iona and Lindisfarne stirred up a deep, inexplicable yearning. Something within me was identifying with this monastic life! Visiting the ancient ruins of a Benedictine monastery in England, I sat to rest on what was left of an outer wall. The booklet that I was reading described the monks’ life of prayer and work together. “You are one of us!” was the compelling voice I heard in my soul coming from the generations of monks who sought and served Christ in that place.

In the years since I entered Sacred Heart Monastery, I’ve depended on the prayers and help of all those Benedictine brothers and sisters who preceded me through history. In these final days of Lent, approaching Holy Week, I am particularly grateful for Saint Aiden and Saint Benedict who challenge and encourage me along this path, as I walk side-by-side with my Benedictine Sisters.