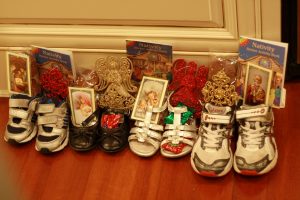 Growing up, I felt very steeped in Catholic Christmas traditions. As a child, I had no idea that other Catholic families might have different traditions from those of my Irish Catholic mother. The Feast of St. Nicholas and the German traditions surrounding it only appeared on my radar once I entered my Community when I was in my early 30s. As a Postulant and then a Novice I was responsible, with my novitiate classmate, for reminding the Sisters to put a shoe outside their doors. Then at midnight, we would creep from door to door distributing sacks of nuts, fruit, and small candies that never actually fit into anyone’s shoe. (Our St. Nick never gives us lumps of coal!) This is a practice handed down from Novice to Novice through the years. One Novice was surprised when she reached an elderly Sister’s door to find a shoe sliding out through a crack at the last minute! In years when there is no Postulant or Novice, another Sister fills in for St. Nick.

Another Community tradition for the Feast of St. Nicholas is the annual St. Nick party at supper and the drawing of names for the Christmas gift exchange. One year, an especially energetic Novice actually dressed up as St. Nicholas, the Bishop of Myra in Turkey! She spoke to us as if she was the early Bishop celebrated for his acts of charity.

My first ministry after becoming a Sister was in early childhood education. I never knew how much the idea of Santa Claus depends on the traditions surrounding St. Nicholas until I started teaching it to my first graders. I delighted in reading the story of St. Nicholas, Bishop of Myra flying through the air on a white horse and dropping sacks of gold into the chimneys where poor families lived. I would also teach them that the Dutch name for St. Nicholas is “Sinterklass.” Then I would ask the children, “Does this story remind you of someone else?” in order to elicit their cry of, “Santa Claus!”

Our Sister Emilie who taught first grade for many years would make little St. Nicholas “shoes” out of old Christmas cards. In shape, they looked a bit like wooden shoes from the Netherlands. I would give each child in my class a shoe filled with small candy treats and hide them in their desks along with a jingle bell on a ribbon that they could wear around their necks – further proof that Santa/Sinterlass/St. Nick had visited them in the night. It was a gloriously noisy, nerve-wracking day, but it was worth it to see the joy and delight on their faces.

I am grateful to my Community for teaching me many things, among them the traditions for the Feast of St. Nicholas handed down from our early German Sisters.