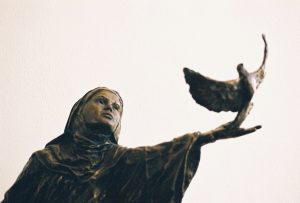 This week on February 10th Benedictine women around the world celebrate the Feast of St. Scholastica, the originator of Benedictine monastic life for women.

According to The Dialogues of St. Gregory the Great, Scholastica was born around 480 in Nursia, Umbria, of wealthy parents. She and her twin brother Benedict were brought up together until the time he left to pursue studies in Rome, became a hermit, and then founded several Benedictine monasteries. According to tradition, Scholastica established a hermitage about five miles from Monte Cassino (one of the first monasteries founded by St. Benedict), and this was the first convent of Benedictine nuns.

In The Dialogues, the following story describes what is most known of St. Scholastica:
Every year Scholastica would meet her brother at a place near his abbey, and they would spend the day in prayer and holy conversation together. On one occasion, Benedict told her it was time for him to leave. Scholastica, perhaps sensing that the time of her death was drawing near, begged him to stay with her for the evening so that they could continue their conversation together. Aware of the ordinances of the Rule, Benedict insisted that he needed to return to his monastery. Scholastica then closed her hands in prayer, and after a moment, a wild storm burst forth outside of the guest house in which they were staying. Benedict asked, “What have you done?”, to which she replied, “I asked you and you would not listen; so I asked my God and he did listen. So now go off, if you can; leave me and return to your monastery.” Benedict was unable to return to his monastery, and they continued the night in holy conversation. Three days later, from his cell, he saw his sister’s soul leaving the earth and ascending to heaven in the form of a shining white dove. Benedict had her body brought to his monastery, where he had it laid in the tomb which he had prepared for himself..

Every year when I hear this story, I am curious about the content of their holy conversation. What was on their minds? Did they talk about the everyday events of their monasteries? Did they seek each other’s advice about certain dilemmas they were experiencing? Did they share their awareness of God’s presence in their lives? Did they review the Rule and its relevance in their lives and the lives of their brothers and sisters?

The story from The Dialogues indicates that Scholastica had a premonition of her imminent death. This would account for her insistence that Benedict remain with her for the night. She must have had something she so wanted him to hear. As I ponder what this crucial message may have been, the subject that comes to mind is legacy. As a woman of wisdom and a devout follower of the Rule of St. Benedict, she may have begun a vision plan with Benedict as they discerned together how to preserve and grow the Benedictine way of life for centuries to come. And that they did! Benedictines are still here after over 1500 years later! St. Benedict wrote his Rule in 516 AD. St. Scholastica died in 543, which means that they studied and lived the Rule together for twenty-seven years. St. Benedict died four years after St. Scholastica. How busy he must have been in his last four years finalizing the Benedictine legacy as the “shining white dove” continued to hover above him!

This important anniversary will be marked during the Federation’s Centennial General Chapter to be held from June 15-21, 2022 at Mount St. Scholastica Monastery in Atchison, Kansas. Prioresses and elected delegates from each house in the federation will gather together to participate, deliberate and make decisions as they look forward to the future. Significant parts of the Chapter will be livestreamed to each member monastery so that all monasteries can participate from home.

At the end of the General Chapter, the anniversary celebration will continue with the Benedictine Colloquium, also to be held in Atchison on June 21-24, 2022. The Colloquium theme is “Benedictine Life: A Vision Unfolding.” Registration for the colloquium will be open to all followers of Benedict—women and men who are professed, oblates, or spiritual seekers—because Benedictine life can be lived in many different ways. Speaker presentations will address the following three goals:

To learn more about the Federation of St. Scholastica’s Centennial activities, visit the website: https://scholastica-celebration.org/

How much this sounds like the legacy of St. Benedict and St. Scholastica. Because of their wisdom and vision, Benedictines are still here today! And the “shining white dove” continues to hover over them.

The following is the text of the Centennial Prayer card for the Federation of St. Scholastica:

And so we pray:
Loving God, we give you thanks
for our Benedictine heritage,
and for the expression of this call and gift in the
communities of the Federation of St. Scholastica.
May our celebration
of the Federation’s first 100 years
strengthen us in our spiritual tradition,
deepen our capacity to listen,
widen our hearts with your love,
and sharpen our spiritual vision
that seeks to see Christ in the heart of all Creation
and at the center of our common life.
One in Christ,
may the communities of the Federation,
oblates, benefactors, and friends,
share the peace of Christ,
show the love of Christ,
and make Christ known in our world.