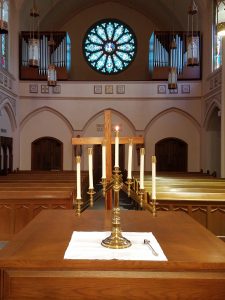 Having just completed five weeks of Lent, we find ourselves now in the middle of Holy Week. If we feel that we have not quite accomplished our Lenten resolutions or experienced our intended prayerful Lenten journey, it is the Holy Week liturgy that will wake us up to what Lent is all about.

The celebration of the Sacred Triduum (Holy Thursday, Good Friday, and Holy Saturday) reminds us that we are making the journey with Jesus to the cross together. Kathleen Norris, in her book The Cloister Walk (Riverhead Books, 1996, pg. 176), describes the Triduum journey as follows:
In a monastery, the Easter Triduum [Holy Thursday, Good Friday, and Holy Saturday] …is a total surrender to worship. Time feels suspended, allowing for focus on the events commemorated: Jesus’ gathering with friends the night before his death to share a last meal; Jesus’ arrest and execution; and his resurrection. If you’ve become acclimated to the normal rhythms of the monastery, the daily round of prayer, meals, and work, the liturgies of the Triduum are guaranteed to throw you off.

One of our liturgies that is bound to throw us off our regular routine and at the same time settle us into the essence of the Paschal journey is the Office of Tenebrae on Good Friday and Holy Saturday mornings. In earlier times, the Hours of Matins and Lauds were combined and sung after midnight. In most of our monasteries today where we no longer pray Matins, we pray the Tenebrae Office on Good Friday and Holy Saturday at our normal morning prayer times when it is already daylight.

The word Tenebrae is derived from a Latin term meaning “darkness.” In ancient times, the service took place in darkness with only a single set of candles burning in the prayer space. A candle was extinguished after the recitation of each psalm, thus increasing the darkness of the church and symbolizing the darkness that Jesus experienced as He hung on the cross. As we enter the chapel for the Office of Tenebrae, a triangular candelabra, known as a Tenebrae herse with three candles on each side of a central candle, is lit on the altar. The chapel is quiet as we anticipate the somber realization that the time to join Jesus in his Paschal journey is here. Because there are no bells are rung during the solemn three-day vigil, the Prioress uses a clapper to indicate the time for all to stand and begin the liturgy.

The standard format of the Tenebrae Office consists of antiphons, six psalms, four sung Lamentations by individual Sisters, responses, and two readings. After each Psalm is sung, one of the candles on the Tenebrae herse is extinguished. The central candle which represents the image of the Christ candle is not extinguished, symbolizing the reality of Jesus’ mission, victory on the cross, and the promised hope of the resurrection. Christ our Light lives on!

The highlight of the Tenebrae Office for us is the a cappella singing of the Lamentations by our Sisters. The Book of Lamentations is a collection of five lament poems by an unknown author, but traditionally attributed to the prophet Jeremiah, describing a “communal expression of grief and mourning” by survivors of the destruction of Jerusalem in 587 B.C. (Little Rock Catholic Study Bible, Liturgical Press, 2011, pg. 1663). The Book of Lamentations is not commonly used in other liturgical services throughout the year, but used exclusively for the Office of Tenebrae. “…With its unsparing focus on destruction, pain, and suffering the book serves as an invaluable function as part of Scripture, witnessing to a biblical faith determined to express honestly the harsh realities of a violent world and providing contemporary readers the language to the same” (Little Rock Catholic Study Bible, pg. 1663).

Our daily commitment to prayer draws us to pray for our world. The Lamentations open our hearts to the devastation and turmoil of our world. As we were listening to the Lamentations being sung last year during the Office of Tenebrae, we most likely felt the burden of all who suffered the effects of the COVID-19 pandemic. This year, the current devastation in Ukraine will be very much in our hearts and in our prayers.

The following passage from Lamentations 1:1-5 might possibly remind us of the suffering of the Ukrainian peoples:
Oh, how lonely she sits, the city once thronged with people, as if suddenly widowed.
Though once great among the nations, she, the princess among provinces is now reduced to vassage…
She passes her nights weeping…
Her oppressors now have the upper hand, her enemies enjoy prosperity…

And from Lamentations 4:1-6:
Those who used to eat only the best now lie dying in the streets; those who were reared in the purple claw at the rubbish heaps.

And from Lamentations 5:1-11:
Remember, Lord, what has happened to us; look on us and see our degradation. Our inheritance has passed to aliens, our homes to barbarians.

Due to our current sophisticated technology, we have observed the horrific details of the Ukrainian crisis for over a month now. The events are so devastating that we hear ourselves saying we have to stop watching the news. Graphic pictures of the Bucha Holocaust and the recent missile strike on the rail evacuation hub in Kramatorsk in which at least fifty people were killed detail the horrific sin against humanity being committed in our own day and time.

Michael Sean Winters, in a recent National Catholic Reporter article entitled “In Ukraine, the suffering challenges of our faith” (April 8, 2022) gifts us with the following insight:
“In the end, we are mute before this suffering. Words fail us and only tears bring solace. We remember that Job’s friends tried to explain to him why he suffered and, at the end of the story, God upbraids them for their presumption. We should not emulate them.

Suffering is, ultimately, a mystery just like love, which is the other side of the coin of human fragility. No, that is not right. There is no simile. Suffering and love are the same mystery because only those who love suffer. Suffering, whether in Ukraine today or on Golgotha 2,000 years ago, is the face of love in the midst of evil. As Christians, we must always resist the evil, but we must also embrace the suffering in obedience to the example of the Master.”

So, as we sing the Psalms and Lamentations this week, we pray that our hearts will become vessels of love for our suffering world.