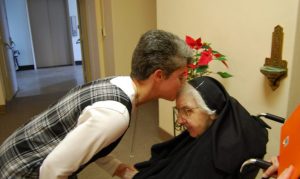 I became a Benedictine when I was fourteen, even though I didn’t know it at the time. I listened with the ear of my heart and put what I learned into practice.

I didn’t recognize my Grandma Whitedeer because she had completely transformed after Grandpa died in 1958, when I was seven years old. She had been out of the workforce for fifteen years. Her previous job was as a machine tool operator at Douglas Aircraft during World War II. After that, she stayed home and took care of her husband, who was ten years older and in declining health. Soon after Grandpa died, she moved in with her youngest son, my Uncle Lloyd. Grandma Whitedeer bobbed her gray hair, dyed it brown, and got a poodle perm. “Grandma, why did you change?” She smiled and quietly replied, “Well, I need money, so I’m looking for a job.” Her Shawnee-Creek upbringing instilled in her the credo of tacit explanations. We were taught not to press further. As a kid, I surmised her transformation as a “workaround” for appearing “too Indian.” Although she was only sixty-one, I thought it odd then that my ancient grandmother reentered the workforce because she needed money and that she had to look less Indian to succeed. Thanks to her makeover, Grandma Whitedeer got an office job at a printing company, as she knew that the prejudices of the time were barriers to her livelihood. Then, she moved into her own apartment and my uncle married his sweetheart.

On August 1, 1965, Uncle Lloyd and Aunt Joyce drove Grandma Whitedeer from her apartment in Los Angeles to our home in the suburbs to celebrate my sister’s 17th birthday. I was up the street babysitting three boys. I was In the garage playing with the children when in strolled Grandma Whitedeer. Grandma grinned from ear to ear and she excitedly asked me, “Did you hear what President Johnson did last week?” Of course, I didn’t because my fourteen-year-old brain was consumed with news of Paul McCartney and the Beatles. “No, what did he do?” She replied, “He signed Social Security into law. I don’t have to worry anymore. Neither will you.” She breathed a sigh of relief. It was the only time I ever saw her giddy except for when Sandy Koufax hit a homer. I tried to be happy, but I didn’t know what it meant or the enormity of the document President Johnson signed. I knew it must be something incredible, though, because she was so happy and she had trekked all that way on foot to tell me about it.

These two incidents left indelible prints on my heart and I began thinking about my other grandma and old people in general, wondering how they managed before Medicare, Medicaid, and Social Security. I learned that our families took care of the grandmas, although we too struggled to make ends meet. From my Creek-Shawnee Grandma Whitedeer getting a makeover to reenter the workforce, I became aware of social inequality, disadvantages, discrimination, and the lack of safety nets for vulnerable persons. I believe these early experiences lead me to seek St. Benedict and my career choice as a gerontologist.

In the Rule, Chapter 37, St. Benedict addressed the needs of “The Elderly and Children.” We are called to be compassionate, and their abilities are always considered. He did not turn them away for being too young or too old to perform strenuous manual labor. St. Benedict valued them as members of the community. While this section of the Rule is only one short paragraph and written when monasteries had children and aging monks, there is no doubt that St. Benedict encouraged special treatment for those who are weakest and at the opposite ends of the aging spectrum. Their nutritional needs and work assignments must be revised to meet their needs. What stands out in this section is the ambiguity, the “middle ground” contrasting individual zeal and a collective mindset, the hallmarks of Benedictine monasticism.

After fifteen centuries, we are still called to consider the special needs of at-risk groups. However, with safety nets in place through social programs, both young and old remain vulnerable, especially those in minority groups. According to the National Council on Aging, (2020), food insecurity is growing among older Americans, up from 5.5% in 2001 to 7.8% in 2016. Malnutrition among older adults starts a cascade of negative events. It often leads to frailty, cognitive decline, loss of independence, and institutionalization. Children require optimum nutrition for positive development outcomes, yet 12.5 million or one in six children are hungry or malnourished (CDF, 2020). St. Benedict challenges us to “provide for them.” As a Benedictine Oblate, I see the sensibility and compassion behind this section of the Rule. Older adults and children are not burdens; they are valued and cherished.

Grandma Whitedeer wasn’t a Benedictine, yet these two significant interactions with her are congruent with the Rule: “Listen carefully, my son, to the master’s instructions and attend to them with the ear of your heart. This is advice from a father who loves you; welcome it, and faithfully put it into practice” (Prol. 1).