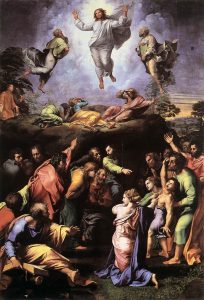 On August 6th we celebrate the Feast of the Transfiguration of the Lord. This beautiful feast celebrates the revelation of the eternal glory of the Second Person of the Trinity to the apostles Peter, James, and John. Normally, this glory was veiled during Christ’s life on earth, but on this occasion Jesus was joined by Moses, representing the Law, and Elijah, representing the Prophets, revealing that Jesus truly was the fulfillment of God’s promises in the Old Testament.

Peter, according to his usual impetuous nature, immediately spoke up and offered to build three tents: one for Jesus, one for Moses and one for Elijah. The common fisherman had little grasp of the theophany unfolding before his very eyes.  However, God had even more to reveal to Peter and the other disciples. The voice of God the Father came from a cloud, symbolizing the Holy Spirit, and identified Jesus as the Son of God in human form: “This is my beloved Son in whom I am well pleased; listen to him.” This divine message not only identified the fullness of who Jesus was, but it also directed the disciples to slow down and listen. It was a warning not to jump to conclusions.  And, it was an invitation to just BE in the presence of the Almighty. The warning and invitation are for us as well–enter into the magnificence of God and spend time there before speaking or acting.

Peter, for once, became speechless. The three disciples immediately fell to the ground prostrate, cowering out of real fear.  True to his nature Jesus stepped forward with a reassuring touch and told them, “Rise and do not be afraid.” Jesus’s words to the disciple echoes the most common message found in both the Old and New Testaments: “Have no fear!….Do not be afraid!….Be not afraid!” As we live through these troubling times, God’s words of reassurance are meant for us too.

My favorite memory of this feast is how special this day always has been to two of our community’s Gertrudes, Gertrude Harrison (Sister Eleanor) and Gertrude Gallas (Sister Kathleen).  These Sisters entered the Novitiate on this feast day sixty-two years ago. In those days, this ceremony was in itself a transfiguration. They entered the chapel dressed in wedding gowns still known by their baptismal names, Gertrude. They left clothed in the monastic habit and with new names, Sister Kathleen and Sister Eleanor. These names given to them by the Prioress represented their being called by God to a new phase on their life’s journey as monastic women. Like all of us, they have spent their lives seeking out the transfiguration that the Lord has in store for them.

The Transfiguration, then, can symbolize for us the life that is to come, the goal we all strive for.  This feast reminds believers that the vision of God unfolds in our daily lives, ever pointing us toward the final movement to God’s presence. God’s action in our lives is always grace-filled and joy-laden. A song often used in liturgies for the Feast of the Transfiguration was composed by Bob Hurd, who is a teacher, composer, and liturgist. The words of the song fit beautifully into our meditation on this feast. I will end with the words to the refrain but I encourage you to go to YouTube if you would like to listen to the whole song.

For information about the painting of the Transfiguration and the artist click here.