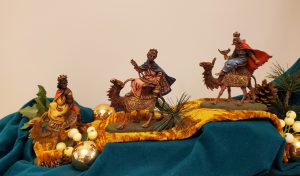 Although my car was expected, sometimes epiphanies come in unexpected events, in the surprises in life. Who would have expected the dwelling of the Most High to be in the womb of an insignificant young Jewish woman? WHAT A SURPRISE!

That parents should receive gifts on the birth of their child is no surprise. But strangers prostrating themselves in adoration and offering gifts to a King- a King who was born in such an unlikely place as a stable. THAT’S A SURPRISE!

In the Gospels, we read that people were surprised, astonished, and amazed at the Jesus of Nazareth. That He cured on the Sabbath-THEY WERE SURPRISED. That He ate with sinners, touched prostitutes, cured the lepers, and the bleeding woman, all no-no’s – THEY WERE ASTONISHED! That He cured the paralyzed and the blind- THEY WERE AMAZED!

That He was raised from the dead- WHAT A GREAT AMAZING AND ASTONISHING SURPRISE!

Yes, the unexpected came crashing upon them in the person of Jesus. To those who were attentive and open to the possibility of surprises, the very fibers of their being were set aglow.

Think of what the Wise Men would have missed if they had not followed the star. What would Mary have missed if she had not been attentive to the angel?