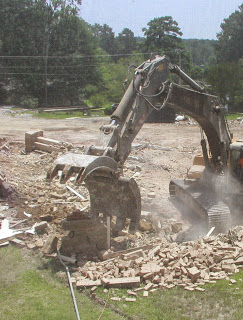 Mid-way through Lauds this morning, during a silent pause between Psalms, the demolition crew began their day by toppling sections of the old cellar walls next door and trying to burst through the concrete foundation. The giant excavator’s ferocious work sent repeated jolts through the chapel that we didn’t just hear, but felt.

I opened my eyes long enough to see that no one else was opening theirs. We just sat – silently praying – through the earth-shattering shudders that were occurring just outside the window. One Sister who bears a specific responsibility regarding construction activity briefly left her choir stall to investigate, but she was back within the same span of silence. And so we just sat. And prayed. And then began the next Psalm when it was time. Like nothing was happening. Like foundations were not being destroyed. Because when foundations are being destroyed, what shall the upright do, except keep praying? Except keep trusting in the presence of God?

The demolition process for Mary Hall and Joseph Hall started with the upper floors and has now reached the foundations. It is time to pull down the final stone walls and crack through the cellar floor. 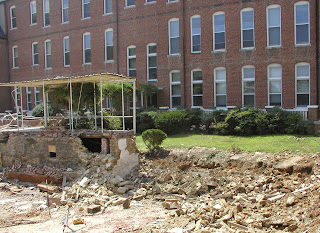 This was the work they began today with their furious whacks from their fierce machines.

The LORD is in his holy temple; the LORD’s throne is in heaven. God’s eyes keep careful watch… (From Ps 11)

Postscript: There is actually one other thing that Sisters do when foundations are being destroyed, and that is to watch! I can hardly pass a window without finding a Sister who has paused in the stairwell, at her bedroom window, in the dish room, at the back door, or at any of the countless other vantage points from which we can watch the demolition. And of course I can’t just pass by. I have to stop, too! It is a fascinating process to watch as the workman wield these giant machines with such care, precision, and even, at times, gentleness.

In the photo at top right, the excavator takes the final “bite” out of the northwest corner of the old cellar below the former Sisters’ dining room.