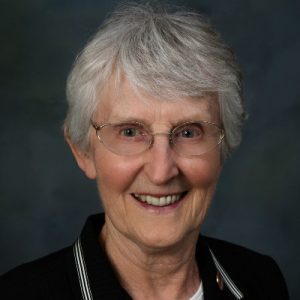 When I entered Sacred Heart Monastery as a postulant in 1996, Sister Bernadette Sachs was in charge of the formation program for postulants and novices. At the same time, she was the Infirmarian as well, overseeing the care of the sick and the elderly. After reading the recent blog by our Oblate Jan White, I reflected on how blessed I was to have such a tender, wise, and caring senior member to witness St. Benedict’s teaching regarding special care for both the elders and the young.

No matter the age of those entering the monastery, their level of education or professional experience, they are “young” in regard to the ways of the monastery. The whole world is viewed from a new and different perspective, and it takes a long while to find familiarity with the spoken and unspoken language and norms of the community. Sister Bernadette’s naturally quiet and kind demeanor, along with her amazing capacity for patience, provided an outstanding example of how to deal with life’s daily challenges. When she received comments from the elders about the immature or nonconventional behaviors of her novices, like running down the stairs, Sister Bernadette would reply gently, “Be thankful we have someone who can run down the stairs!”

As a young monastic in Initial Formation I found myself perplexed and frustrated with the way some Sisters in community did not seem bound by the same behavioral expectations that I was given when I entered. At some point, I expressed my inner turmoil to Sister Bernadette, and she answered me with a gentle but pointed question that has stayed with me to this day: “Is that the kind of monk you want to be?” Her words gave me much to ponder. I still reflect on this question, especially when I find myself discouraged or upset about something. I have the power to choose in each moment the kind of monk I want to be by my intentional thoughts, words, and actions.

In regard to doing dishes, Sister Bernadette advised: “Nobody is finished until everyone is finished.” If I finished my part of handling the dirty dishes, then I shouldn’t just walk away if the other Sister hadn’t finished putting the clean dishes away. It became a practical way to remind myself that we are all in this endeavor together—all the way to the end. None of us is allowed to just walk away because her part of the overall task is completed. This is one expression of mutual obedience. As long as there is a task to be completed, we serve side-by-side, contributing however we are able, so that in all things God may be glorified.

Sister Bernadette’s care for the elders in the Infirmary was an outstanding witness, too. She went to great lengths to make each Sister know that she was loved and valued no matter the degree of her limitations. She took time to be fully present with them rather than simply to do for them whatever was needed.

Twenty-five years later, Sister Bernadette continues to inspire me with her unceasing dedication to prayer and service both within the community and without. Her persistent giving of herself always reminds me of the monk I hope to become. Serving as the kitchen supervisor is a very demanding task, and Sister Bernadette has fulfilled this duty with extreme dedication, especially through the ongoing pandemic.

During all my years in the monastery I observed Sister Bernadette’s continual dedication to her family, especially to her siblings, nieces, and nephews. To the generations of Catholic school students who have been taught by her, here in her hometown of Cullman and elsewhere, she remains a kind of spiritual mother, whose loving affection seems to know no limits. When we have guests joining us for Sunday Eucharist (not during the pandemic), the children and grandchildren of her family and her former students are still drawn to her with beaming smiles and eager hugs.

St. Benedict writes in his Rule that the senior member chosen to look after new members ought to have the skill for winning souls (58:6). Sister Bernadette has won more souls for the Lord than she would be able to count! In my heart, I still think of her as “nonna,” the feminine form of nonnus which Benedict translates to mean “venerable one.” (63:12). That was what I called her in my Initial Formation years out of respect and affection. May every young monk be as blessed to have such a venerable one as a faithful witness to demonstrate how win souls by putting the teachings of the Rule into daily practice.