The teachings of Jesus inspired me to religious life... 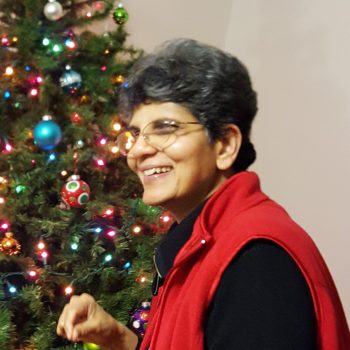 The teachings of Jesus  inspired me to religious life at the age of fifty-six.  I read in Mark 8:36 and Matthew 16:26 “What good is it for someone to gain the whole world, yet forfeit their soul?”  Other scriptures called to me, too, such as: “I say to myself, I will not mention him, I will speak in his name no more.  But then it becomes like fire burning in my heart, imprisoned in my bones; I grow weary holding it in, I cannot endure it.” (Jeremiah 20:9), and, “If today you hear his voice, harden not your hearts” (Ps 95:8).

My last name, D’Souza, is very common in Goa on the southwestern coast of India, a former Portuguese colony in which St. Francis Xavier established many Catholic communities.  My parents moved from our ancestral home in Goa to Gujarat, the home State of Mahatma Gandhi, to raise me, my three older sisters and brother.  Catholics (3% Christians in India) lived peacefully among Hindus, Muslims, Buddhist, Sikhs and people of other religions.  We lived in a small town with one Catholic Church and school taught by the Sisters of St. Joseph. My parents were faithful Catholics who taught us to do the right thing and were good examples of integrity to us.

I am the youngest of five and I have wonderful memories of my childhood growing up visiting my grandparents in Goa. We moved to Bombay after my dad retired and I completed my education and started my career as an Executive Assistant.  As a young adult I had a strong devotion to the Sacred Heart of Jesus and to the Blessed Virgin Mary.  On getting married I moved to Kuwait with my husband. After being widowed at a young age, I moved to Houston, Texas with my young daughter in order to live near my brother, thirty plus years ago.  It was a challenging phase of my life but I made it through with the help of my family, my faith and trust in God.

I worked in the banking, airline, and healthcare industries in various administrative positions and stayed busy with my job and raised my daughter as a single parent. When my daughter was in high school, I decided to volunteer at my parish in Houston, Texas and for twelve years assisted with the needs of the parish.  I served on the Pastoral Council, a Committee for Seminarians during their parish training, assisted with preparing Liturgical schedules and training of Extraordinary ministers, arranged for Lenten and Advent Retreats, Taizé service and other spiritual events for the Parish.  I visited the sick and brought Eucharist to homes, nursing facilities and hospitals.

Meanwhile, I completed a year’s training offered by the Catholic Diocese of Houston, Texas to visit the sick in the hospitals and brought Eucharist to Catholic patients. I also attended classes to learn more about Catholicism and the transitions after Vatican II. My plan was to go back to school to get a Masters in Pastoral Studies, so I could become a chaplain after I retired from my job. So I did, and earned three credits.  Meanwhile, God had another plan for me and soon I was visiting Benedictine monasteries and discerning religious life.

Participation in hospital ministry was an important ministry to me, and I served for five years visiting the sick and bringing Communion to Catholic patients.  Eventually, as my daughter neared completion of a Ph.D. program and was soon to be married, I began to seriously discern a call to religious life as I had this deep sense of calling.  I wanted to give back the blessings I received for the glory of God and be of service in God’s Kingdom.  After working for thirty seven years, discerning with my Pastor and Spiritual Director, and with the support of my daughter, I entered the Benedictine Sisters of Cullman, Alabama in 2013 on my fifty-sixth birthday.

I remained faithful to my call for seven and a half years, learning, praying and living the monastic way of life with the Benedictine Sisters of Cullman and on June 27, 2020 I made my Perpetual Monastic Profession.  Watching a beautiful rainbow at sunset that day was an amazing gift of God!

During my years in monastic community, I have served in managing the Pastoral Care Ministry at Our Lady of the Valley Catholic Church in Birmingham visiting the sick and dying.  In 2017, I completed a Unit of Clinical Pastoral Education (CPE) at Princeton Baptist Hospital in Birmingham.  Since that time, I have had assignments at the monastery in various roles, including at Benedictine Manor and in the Retreat Center.  I especially enjoy working in the Sacristy and serving the Sisters in the Infirmary.  I also visited the sick of two local churches in Cullman. I serve on the community’s Peace and Justice, Liturgy and Election Committees.

As of August 2020, I now work in the Monastery’s Development Office using my years of administrative experience and skills.  In my spare time I enjoy baking, caring for rose bushes, and in celebration of Pope Frances’ fifth anniversary of Laudato Si: “On Care for Our Common Home”, I have planted an apricot and plum tree on the monastery grounds.  In all of these roles I am humbled to follow Mother Teresa’s call to be faithful in little things!