The rhythm of prayer, work, and community felt more natural than anything else I had ever experienced... 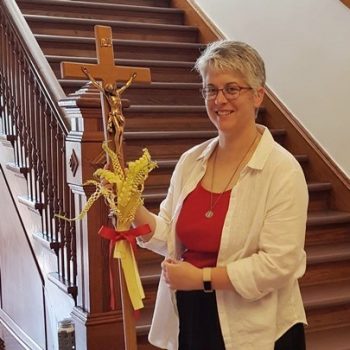 I grew up in a Roman Catholic family in New Orleans, LA and attended Catholic schools for elementary, secondary and college education. A few vowed religious were on staff at these schools and influenced my vocation discernment process.

I was six years old the first time that I ever vocalized an interest in becoming a Sister. I loved my first grade teacher, Sister Gerard Leahy, O.P. and wanted to be like her. I remember telling my older brother that I wanted to be a Sister like Sister Gerard. His response to me was, “You can’t do that!” After this experience I decided to be more careful about sharing my thoughts and feelings about a possible religious vocation.

It wasn’t until my junior year in high school that I shared my interest in religious life with my parents. They were cautiously supportive, emphasizing their wish that I at least finish college before making any final decisions. At this point in my discernment journey, nothing was clear. All I had was a mysterious and persistent nudge in the direction of religious life. I continued to live life like an ordinary American teenager.

After graduating from St. Mary’s Dominican High School in New Orleans, LA, I attended Spring Hill College in Mobile, AL. The Catholic identity of the Jesuit institution attracted me very much, yet it seemed to me a work of God that made attending Spring Hill financially possible. Sensitive to the possibility that “God has a plan for me,” I became more serious about entertaining religious life as an option. Prayerfully, I even made a deal with God on a retreat during my first semester: “I’ll do whatever it is that you want me to do, but you have to give me something more specific to work with. I give you a year to make your will known to me, or I’m going to go my own way.” God heard my prayer and took it seriously. Opportunities opened up for me that I never expected, and I was more at peace with the mystery of God’s loving will unfolding in my life.

During my four years in college, I learned much about prayer and theology. I learned about good friendships. I kept my options open. I continued to ask, “Yes, Lord, but where?” I discerned seriously with a small Dominican community in my home town for a couple of years, thinking that my many years of Dominican education might have been providential in that way. However, in the spring of my senior year I experienced an unexpected “shift” in my inner self that seemed to indicate that this path was not God’s choice for me. All of a sudden, it no longer felt right. This change was difficult to explain to the vocation director with whom I was in dialogue.

Around this same time I was introduced to a Benedictine Sister from Cullman, who came to Spring Hill for a lecture. My theology advisor and spiritual director made it a point to introduce me to her after the lecture. Sister Marian Davis, upon hearing that I did some volunteer work the previous summer stated, “Well, there is always some work needing to be done at the monastery.” After exchanging letters multiple times, I surprisingly committed myself to a two-week stay for volunteer work the following summer. I had no vocational interest in monasticism whatsoever but kept myself open to whatever God had in mind.

What I did not expect was to find myself so naturally “at home” in the monastery environs once I arrived. The rhythm of prayer, work, and community felt more natural than anything else I had ever experienced. I found myself equally shocked and excited. I asked God, “Was this what you had in mind all along?” Recalling the “deal” I had made with God years earlier, I prayed with trusting hope, “Lord, if this is what you want, you need to make it happen. I don’t know how to explain this to my family. And I do not know how my student loans are going to get paid. But I trust that you have a plan for that, too.”

Before leaving Cullman, I formally asked the Prioress to be an affiliate. At the beginning of November I received permission from my parents to begin the application process. In April, I received formal approval to enter the community as a postulant the following August. Everything I worried about fell into place with little trouble at all. It seemed surreal yet certain.

In my twenty-three years as a member of this community, I have served as a teacher in various schools of the diocese, directed the Benedictine Sisters Retreat Center, was an assistant administrator at Benedictine Manor, and fulfilled multiple roles of service within the community. Currently, I serve as the community’s Treasurer and Archivist. I oversee the monastery grounds, manage the website for the Federation of St. Scholastica, and serve on the Board of Directors for Hope Horses. Besides serving on various committees within the community, cantoring at liturgies, completing art projects, and helping individual Sisters with various projects are other ways that I spend my time.