My soul soared as I heard the Sisters sing the Psalms... 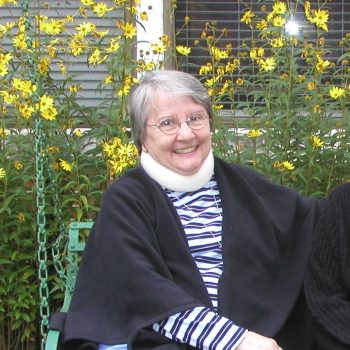 I entered my Benedictine community the day before my 50th birthday. My life’s journey began in Western Massachusetts. That is where I was born and where I lived for the first 44 years of my life. It was a largely Catholic area, so my older brother, sister and I were cocooned within our neighborhood, our local parish, and parochial school.

My Catholic education extended through college. It was then that I had my first genuine encounter with monasticism. When traveling home for weekends or vacation I would drive by Saint Joseph Abbey and its resident Trappist community. As an avid reader, I had read about the lives of several monastics and had come to deeply admire them. Thus, I satisfied my desire to gain fuller insight into their way of life by stopping at the Abbey for prayer. Those were pre-Vatican II days when the monks were steeped in silence and prayer was in Latin. Although I didn’t understand it, I was deeply moved by its spirit and made a point of stopping by whenever I could.

Faith was a very important part of our family’s life. From an early age, I wanted “to be a nun” when I grew up, and that desire lingered into college. However, much happened between then and my final arrival at Sacred Heart Monastery. As a young adult both Church and religious life faded into memory. But, I never stopped my spiritual quest…seeking deeper awareness of the Divine Mystery through other avenues.

I chose a career in retail advertising. Initially, it was a new and fascinating experience that called forth my creativity. Furthermore, my employer was primarily committed to customer service and that was a goal that I greatly respected and gladly supported. As years passed and events unfolded, my restless heart began to pull in another direction and I started questioning my career choice. The words of soul-friends encountered in books plus the lives of family and dear friends, convinced me that there was more to life than sales promotion. I could no longer justify telling people that they needed “things” because life was teaching me that “things” weren’t what really mattered. Ultimately, living through the illness and deaths of my brother and parents within a three-year period had a profound impact upon me. I became convinced that it was time for a change. Although I didn’t know what I wanted to do next, I did know that I didn’t want to die without having lived more authentically.

Consequently, I took a leap of faith and moved into the unknown…choosing “a way of life“ over a “career.” As the labyrinth of my path unfolded, it led to an extended discernment retreat in the foothills of the Rocky Mountains of Colorado. There I encountered our Compassionate Creator more intimately and was increasingly lured back from my wandering ways. This experience ultimately strengthened my bond with the Church and led to involvement with a diocesan volunteer program, serving as a staff member at a shelter for the homeless in the San Luis Valley.

My life was filled with new meaning and purpose, sustained by the voices of those who filled my days with friendship, questions, struggle, pain, wonder, joy, and fulfillment—all in the midst of the stunning beauty of Colorado. Even the voice of silence spoke during solitary times of continued renewal within a Rocky Mountain hermitage.

Financial challenges resulted in the dissolution of the Colorado program, but my desire to serve continued and resulted in a transfer to a volunteer program sponsored by the Trinitarian Sisters. Through them I served on the staff of a community center in Brooklyn, NY. The Trinitarians also provided me with my initial introductions to Alabama and my future Benedictine community.

All volunteers gathered in Holy Trinity, AL for orientation and retreat. We also renewed our volunteer commitment on an annual basis. When the appointed time arrived for me to renew mine, I told the director that I had begun to feel the pull to religious life again. But I questioned whether it was reasonable for me given my age. I clearly was drawn to monastic life but didn’t feel that I was meant to be cloistered. “Oh, I know who you should meet,” the director exclaimed, “the Benedictines in Cullman. And you’ll be driving right by them on your way back to New York.”

A call to Sister Virginia Rohling, the Community’s Prioress at that time, resulted in an invitation to visit. I arrived on a Sunday afternoon, just in time for Vespers (Evening Prayer). My soul soared as I heard the Sisters sing the Psalms. It evoked memories of my initial encounter with the Trappists, years before. Thus I began the process of discernment and eventual entrance into our Sacred Heart Community. Life here has lured me into listening for the voice of Jesus, the very Heart of Love, within our daily liturgies, in life shared with my Benedictine Sisters, our families, friends and the guests who come to our retreat center where I once served as a staff member.

Challenged by various health issues I reside in our infirmary, but I try to stay as active, informed and involved to the degree that I am able. As I type this reflection about my life’s journey, the poem Regrets by Robert Morneau comes to mind. Although I’m not terminally ill, like the person mentioned in the poem, I totally resonate with his spirit. That spirit beautifully expresses the truth of my own experience as well. The poet wrote:

“I have no regrets.”
John’s comment to his hospice nurse.
His days ahead limited,
the years behind – seventy – abundant.
His philosophy was one of gratitude,
so many joys and sorrows to be thankful for,
page after page in his life’s manuscript
telling of the victories and failures of the human journey.

From whence this acceptance,
nay, this gratitude and joy?
It was more than temperament-
it was the working of grace.

Thanks be to God.